After sending five of their ten wrestlers to the tournament Finals, finding four others in tough consolation brackets, and leading perennial powerhouse and Big Ten champion Iowa by the slimmest of margins, it was imperative that every remaining teammate dig deep for each other. And, wow, did they ever do that! Not only did all five finalists go on to win championships, but the other four in the consis scraped every point they could and Penn State came out on top in the closest Big Ten tournament since Penn State joined in 1993, as they edged Iowa 139 to 138 in a tournament filled with drama until the very last match.  It was Penn State's first ever team championship, their highest team score by a wide margin, and the most champions they have ever crowned in a single year. They ended Iowa's three-year run of conference championships and served notice to the country that Penn State Wrestling will be a force to be reckoned with for years to come.

Big congratulations to these Penn State wrestlers who all earned their first individual Big Ten Championship:

They bring Penn State's list of individual Big Ten champions to 24 and, at the risk of getting way ahead of ourselves here, all but Molinaro are young enough to possibly one day join an elite club of 50 three-time champions that includes Penn Staters Sanshiro Abe and Kerry McCoy, and Taylor and Ruth are candidates to join the 10 four-time champs.  While Long, Molinaro, Taylor and Ruth were all seeded #1 in their weights, Quentin Wright had been really struggling to end the season and was seeded eighth.  After a big day yesterday avenging recent losses to the #1 and #5 seeds, Quentin completed his amazing turnaround by holding off a late rally against #2 Kevin Steinhaus to avenge a big beatdown from him just a few weeks ago.  His pre- and post-match interviews were heartwarming as he thanked his mother, brother and the community for sticking by him as he overcame his recent struggles.  The whole Penn State family should be proud of and happy for him as he heads off to nationals.

Tournament scoring in wrestling is a real bear to stay on top of.  It's got three categories of scoring (Advancement, Placement and Bonus) with values that vary depending on brackets, so keeping up with what is needed for team victory can be tricky.  And in a tourney of unprecedented (!) closeness, it wasn't until after the 184 pound matches that we could clearly see what was needed for the team win.  Penn State had nobody still wrestling at 197, and Iowa had finalists there and at Heavyweight.  If both Iowans were to win, we would have been doomed, no matter what.  But we also still had a heavyweight competing and, although it was disappointing for our #1 seed Cameron Wade to be competing for 5th place instead of first, he could still earn a key team point for winning the match.  We got the help we needed when Wisconsin's #1 seed Trevor Brandvold stopped #2 Iowa's Luke Lofthouse 5-2, and it all came down to the heavyweights.  Penn State was ahead by 3 points and a Rasing win would be worth 4, while a regular decision win for Wade would only be worth 1, resulting in a team tie.  However, any bonus points scored by either wrestler would serve as the tie-breaker, so Wade went out and dominated his favorite target Ben Apland in a team championship-clinching Major Decision, earning 2 crucial team points and nearly rendering Rasing's result moo.  I say nearly, because at one point near the end of the match, Rasing rolled Minny's Nelson onto his back and nearly had him pinned. Nelson also injured his knee on the roll and had he been forced to Medical Default or had Rasing stuck him, Iowa would have earned 2 points in addition to the 4 for winning and would have knocked us back to second place. As it was, Wade, who had what could only be described as a disappointing tournament up to that time, ended up the hero.  Congrats to Cam for a clutch, clutch performance.

In addition to the five worthy champions and Wade's consolation heroics, three other wrestlers scored crucial points in the wrestlebacks.  Senior Brad Pataky did not have the tournament he wanted to finish his career (and may be in real jeopardy of not being invited as an at-large to nationals), but he scored two extremely important Technical Falls--one in the consi quarterfinals and one in the 7th place match.  And 141 pound true freshman, Andrew Alton, despite poor luck in drawing byes and opponents in this loaded weight class, scored an important TF in the consi quarters.  And last but not least deserving mention is unheralded and unseeded 165 pounder, RSFR James Vollrath.  After getting bounced to the wrestlebacks courtesy of eventual champion Howe, he squeaked out a 4-3 win over #7 seed Ryan LeBlanc.  Then, after taking #6 Dan Yates to overtime before falling 3-1, he scored a massive pin in the 7th place match in :57 seconds! Wow! Hindsight shows us how important that was.  Congratulations Jimmy!

The win puts Penn State tied with Illinois for third in conference championships since 1993, behind Minnesota's 6 and Iowa's 11. 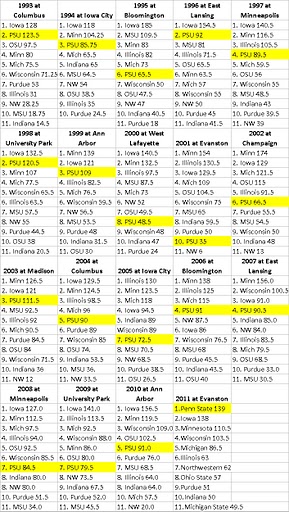 With so many of our new champions having years of eligibility remaining, and with a coach who aspiring wrestlers clearly want to come wrestle for, the future certainly looks bright for Penn State wrestling.  That future could begin as early as two weeks from now in Philadelphia, but for now it feels good to win today.  It feels especially good to, at least for now, break the stranglehold that Iowa has had on the whole conference for the past three years.  And make no mistake about it, if Penn State hopes to win more championships in the future, they will have to do so by besting the Hawkeyes, who are plenty young in their own right and always, always hungry.  We'll have more in-depth analysis in the coming days, so for now, we'll leave with a big congratulations to the 2011 Big Ten Champion Penn State Nittany Lions.  You did us all proud, boys!