Penn State has been rolling up some solid recruits for the football Class of 2012 lately, but over the weekend, Lions247.com reports the Nittany Lions secured the commitment of possibly the biggest standout of the group yet, five-star ranked defensive tackle Jarron Jones. 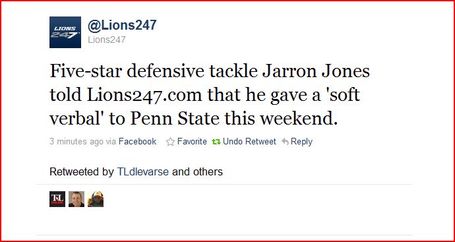 Jones stands 6'6" and 305 lbs according to Rivals.com and hails from Aquinas Institute in Rochester, New York. He reportedly has offers from everyone under the sun including Alabama, Florida, Michigan, Notre Dame, Pittsburgh, Ohio State and Virginia Tech.

Rivals.com's Mike Farrell has a pretty glowing review of the prospect here.

In the 2012 class Rochester is home to defensive tackle Jarron Jones, a massive 6-foot-5, 305-pound force in the middle of a defense that's going to be one of the East Coast's most coveted prospects.

Scout.com, which also give Jones five stars and ranks him No. 2 in the nation at his position, offers this:

As a junior, Jones had 68 tackles, 14 tackles for loss, 10 sacks, an interception and a fumble recovery for a touchdown.

Jones has a max bench press of 315 pounds. He reports a 2.5 core GPA and will be taking the SAT after his junior football season.

According to Rivals, Jones was recruited by assistant coach Mike McQuerey. Looks like the staff is on quite a roll at this point. We'll see if the momentum continues after the Spring Game this weekend. Here's what you've won.

UPDATE: Lions 247's Steve Wiltfong offered this on Jones a few days ago. Might offer some insight into the "soft" verbal.

For the 6-foot-6, 300-pound Jones, it will be the second trip to Happy Valley for the Rochester (N.Y.) Aquinas Institute standout. Jones visited for a game during the fall, and word is, his mother is very high on the Nittany Lions early in the process. Jones plans on taking several trips this summer and all of his official visits before deciding. He even indicated his decision could come after National Signing Day, however, it sounds like his mother might not allow that to happen.