It's Championship Week in the college gymnastics world (and somehow it all centers in Ohio). The women are heading to Cleveland for the weekend championships, while the men are in Columbus for three days to determine the team and individual champions for this 2011 season. While the team fell just short of qualifying for the championships, the Penn State women will be sending Sharaya Musser to go after the all-around championship. One of the top competitors in the nation, we wish her the best and hope that she can bring home an individual championship for Penn State. On the men's side, Penn State enters these championships as the #5 team behind Oklahoma, Stanford, Cal, and Illinois, and will be looking to make a run for the 13th Men's Gymnastics Championship in Penn State history.

There are a few (major) differences I want to touch on first:

With the underlying details set, let's meet the Nittany Lions making the run for the championship.

Due to time and space reasons (the men's team is much larger than the women's team), these will be shorter. But I did promise pictures, so pictures shall be had. 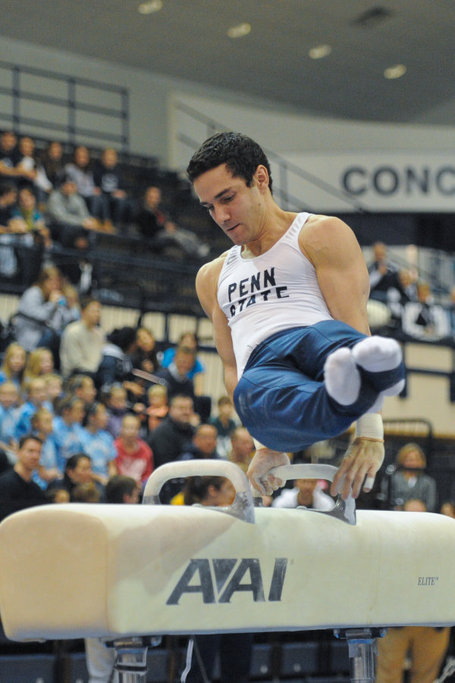 First up is Matt Albrect. He's the lone senior and the captain of the team. He does just about every event, with the lone exception being the still rings. And he does all his events well.

Right be hind Matt is Felix Aronovich - the only Nittany Lion who has been completing the all-around in the past few meets. Like Matt, he does everything and does it very well. Even better, he's only a sophomore. 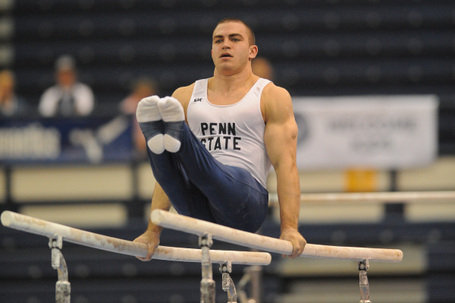 Junior Miguel Pineda focuses mostly on three events - pommel horse, still rings, and parallel bars. He ranks 4th in the nation on the rings, so he could be making a run at an individual title in that event as well.

RS Junior (yes, they redshirt in gymnastics as well) Warren Yang is used mostly on the floor exercise, parallel bars, and horizontal bar, with an occasional appearance on the vault. His floor exercise is currently good enough for 6th in the nation. 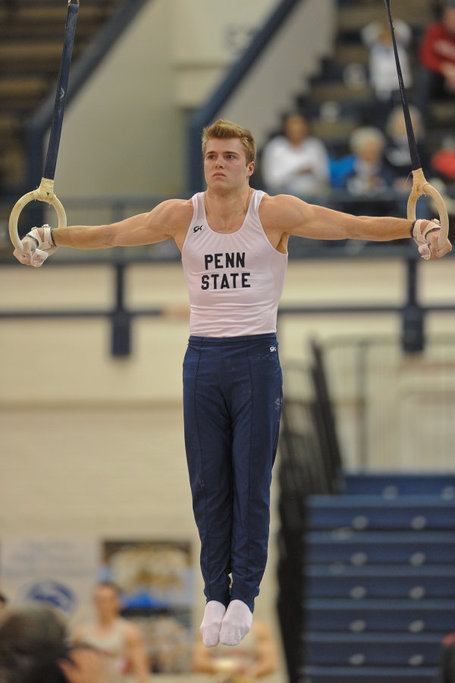 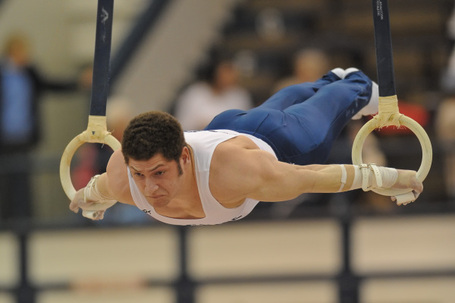 Grouping some of the team together, Parker Raque (above left), Matt Chelberg, Mackenzie Dow, and Scott Rosenthal (above right) make up a very talented Sophomore crew. Rosenthal is 3rd in the nation on the still rings and will make a very serious run at that individual title. Raque opened the season with two all-around competitions, but has been since used to solidify three events (floor, rings, and vault). Chelberg competes on the same three events as Raque, and consistently puts up solid scores. And Dow focuses on the vault, parallel bars, and horizontal bar, and like Chelberg, finds ways to put up consistently strong scores.

Next is the group of freshmen: Francisco Vazquez, Nestor Rodriguez, Nihir Kothari, Adrian Evans, Preston Gall, Wasef Burbar. All 6 of these freshmen have become mainstays in the lineup, usually specializing in one event for this season. Vazquez has found himself as a regular in three events (floor, pommel horse, and vault).

Finally, we have the spot players - Colin Hill, Logan Wyman, Tony Beck, Ingvar Jochumsson. Hill has found his way as a regular on the vault, while the others have made a few appearances here and there. Still, these are talented athletes who are ready to be part of the starting lineup when called upon. 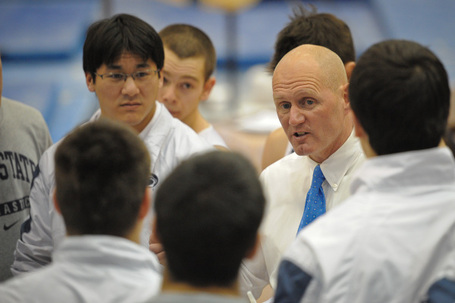 Head coach Randy Jepson on the right, along with assistant coach and 2008 US Olympian Kevin Tan

Heading into the championships, there is some good news and bad news for the Nittany Lions. The bad news is, they are entering on a slump. After sailing through the entire season, Penn State finished last in a tri-meet with Oklahoma and Illinois, and then followed that up with a 4th-place showing at the Big Ten's. Still, this is a Nittany Lion team that ranks in the top 6 in every event except pommel horse. And that will be likely the biggest key for Penn State - not messing up on the pommel horse. They scored their season low on the event at Big Ten's, and a decent showing would have put them in second behind Illinois.

Penn State has a very young and talented team. They should be able to make it to the final 6, but at this point, the other top teams (mostly Oklahoma and Stanford) are just hitting scores that are beyond the Nittany Lions' reach right now. Although they might not becoming home with the team trophy, Penn State might make some waves in some of the individual championships, while making people aware that they will be serious contenders for the next few years.