After an onslaught of rumors and media games from the athletic department, the Penn State Nittany Lions officially announced yesterday the new head coach of the Penn State Nittany Lions NCAA DI Men's Ice Hockey team - Guy Gadowsky. A native of Edmonton, Alberta, Canada, Guy Gadowsky will be leaving his head coaching position at Princeton University to become the first head coach of the modern era of Penn State varsity ice hockey. He is expected to begin some of his coaching duties starting this 2011-12 season with the ACHA Icers. From what I understand, he will be doing some more of the behind-the-scenes work (personnel, systems, recruiting), while current coach Scott Balboni will remain behind the bench on gameday for the Icers. This will give Guy an opportunity to get acclimated to Penn State and what it will take to start moving this team from club level to a full-fledged varsity sport. 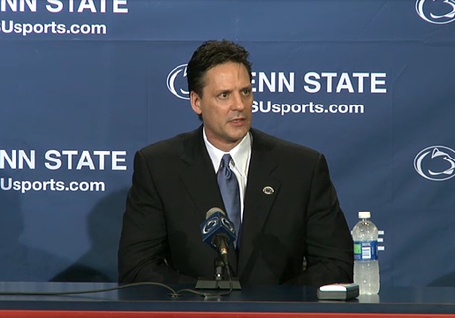 So what has Gadowsky done? After playing for four years at Colorado College, Gadowsky bounced around the minor leagues (and internationally) for five years before making the jump into coaching. He began his head coaching career with the WCHL's Fresno Falcons, finding sustained success during his three years with the team. Gadowsky then moved onto the college ranks, taking a position with the University of Alaska-Fairbanks Nanooks in 1999. There, he took over a team that had not seen a winning record in the previous five seasons. After two horrible transition seasons, Gadowsky helped lead the Nanooks to back-to-back winning seasons, including a 22-12-3 record in his third season as head coach. He would finish his coaching career at UAF with a record of 68-89-22 (44.1% winning percentage).

In 2004, Gadowsky decided to try rebuilding a different team, making the move from Alaska to Princeton, NJ. When he arrived at Princeton, the Tigers were coming off of seasons of 3-26-2 and 5-24-2. Over a few seasons, Gadowsky took the Tigers from a perennial doormat and turned them into a team to be reckoned with. In the fourth season, Princeton would win their first ever Ivy League title, win the ECAC Hockey Championship, and make their first NCAA Tournament appearance in 10 years. The Tigers would make the NCAA Tournament again the following season, giving Gadowsky two of the three NCAA Tournament births in Princeton ice hockey history. He finishes his coaching career at Princeton with a record of 105-109-15 (49.1% winning percentage).

Right away, Penn State is getting a coach who has proven that he can make something from nothing in just a few years. As Guy mentioned at the press conference, Penn State likely has more already in place than UAF or Princeton had when he took over those programs. Will we see immediate success? No, and Gadowsky has made mention of that as well. The first year will be a feeling out process for everyone, and the second year will see this team being thrown into a conference with five programs that have a deep history of success. Still, the work ethic and recruiting connections that Guy Gadowsky brings to the table make it a real possibility that Penn State starts to make some serious noise by the fifth season at the varsity level. He has big goals and ambitions for the program, looking to recruit heavily from the talent-rich Mid-Atlantic states, Canada, and yes, even internationally. Along with all this on the ice success, Guy will be making every effort to adhere to the values and academic emphasis ("Perfect graduation rates, that's the goal.") that runs through Penn State Athletics. In every way, he sounds like a perfect fit for Penn State and the start of the NCAA ice hockey program.

A few extra links for your reading (or viewing) pleasure:

The Final ACHA Schedule: Turning our attention to the up-coming ACHA season, the 2011-12 schedule has been released and there are some interesting things to note. First, the Icers will be dropping out of the ESCHL for this final season and playing as an independent. This means that there are no required league games for the Icers, which is both good and bad for the schedule. On the bad side, the Icers will be filling some of their weekends with some lesser teams - West Virginia, Rutgers, Mercyhurst, and Lebanon Valley, most notably. On the upside, the Icers were able to schedule games against regular rivals (Ohio, Rhode Island, Delaware, West Chester), while adding some games against other top ACHA teams (Illinois, Oklahoma, Central Oklahoma). To cap it off, the Icers have two games against NCAA D3 games on the schedule for early November - on the road at Neumann University before welcoming SUNY-Fredonia to Hockey Valley. It should be a fun way to end the Icers' time at the club level.

Roster Notes: A couple of last things to make note of, captain Marek Polidor (who you may have seen in a recent Penn Stater magazine) will be returning for one last season. He missed the team and didn't play hockey his freshman year, giving him an extra year of eligibility. While I am unsure of his educational plans at this point (he did graduate with a degree in Science), I do know that he will be traveling to China this summer to intern for Goodyear. Assuming he will keep the "C" (and I see no reason why he wouldn't), Polidor will be the first two-time captain since Keith Jordan (captain from 2006-08).

Along with Polidor's return, March saw more players added to the roster, as another push of recruits committing to Penn State were announced. Joining goalie Tim Carr and forward Josh Friedman, the Icers are excited to welcome Dan Melselman, Forrest Dell, Peter Sweetland, and Chris "Creek" Lewis to Hockey Valley. PennStateHockey.com has some more information on these recruits, as well as an updating list of recruits as they commit.