Nitt Links: The Morning After

Share All sharing options for: Nitt Links: The Morning After

*Steps up to speaker*

I've written this opening way too many times over the past hour and I've yet to figure out the way to arrange the words in a fashion that does the situation justice. As a sports blogger, politics are almost completely off the table. Speak about it one way, and you're accused of taking a side. Talk about something, and you're trying to tell somebody how to think. Generally it's just not worth the effort. (Doing this with sports being a different issue all together #TeamBolden)

But as the person who welcomes you to the site each morning, I would be remiss if I pretended nothing happened outside of the sporting world last night. While you and I may disagree on health care or social security, the death of Osama Bin Laden is an event that has brought at least some closure to Americans everywhere. While the attacks on 9/11 will always be fresh in our minds, and those who were lost or wounded can never be forgotten, plain and simple, last night was simply a victory for the good guys. 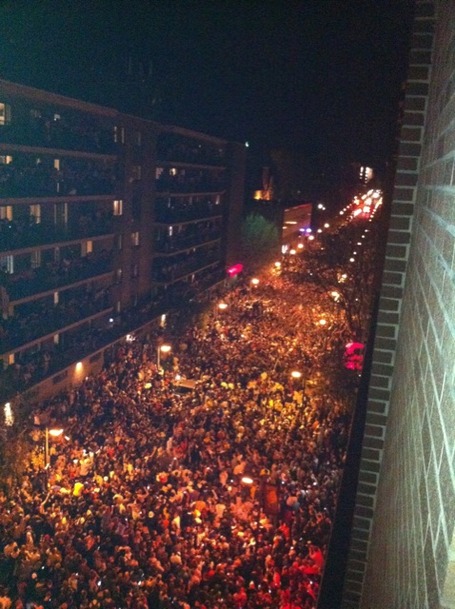 Certainly, Bin Laden's death in no way signifies the end of our War on Terror. While Al Qaeda's numbers have dwindled into the mere hundreds over the past few years, they won't go without a fight, but as always, America in one way or another will come out on top.

If there is any political soapbox to stand on, it's to remember how you felt last night. To remember that sense of pride you had when the President took the podium and told us what had happened. If it was by your TV with your family, or out on Beaver Ave chanting U-S-A. That little slice of pride is what makes this country great. Osama Bin Laden was an evil man, who did evil things, but he also was an idea. What he represented was a concept beyond any fundamentalist beliefs or ideology. Osama Bin Laden represented something that can never be shot or killed, something that will always have a grasp on the darkest corners of this earth.

In many respects America isn't a perfect country. We spend too much time online and not enough time in the sun, our politicians could be better, and we're all a little fat. But when it comes down to it, we're good people.

So if you want to kill Osama, if you really want to win. Pick up your trash when you're eating somewhere, hold the door for a stranger when they need a hand, keep your promises, and tell your kids or your parents you love them just because you do. Remember how you felt last night and use that to do something good. That's how we win this damn war.

Tough loss but not killer. The #1 seed would have been nice though.

Talk about good and bad.

This is my fault. I never watch baseball and I watched these games.

Apparently Royster will be in the mix for the starting spot. Would love to see him get reps behind of a good offensive line.

Crider would be a good addition to the roster. Would be the last on board with the remaining scholarships.