You will have to excuse my lack of updates and haphazard nature of this update in particular. Between the basketball coaching news, and the fact that I'm not used to having to write about the Icers at this point in the year, the past few weeks have found me somewhat behind with my Icers updates. Over the past few weeks, we have seen a number of new recruits commit to Penn State, including a kid with some (last) name recognition, some clarity to the head coaching situation for the final season in the ACHA, and some belief that the women's head coach will be named in the coming weeks.

Balboni Steps Down: Ever since Guy Gadowsky was named head coach of the varsity team back in April, there has been a large amount of curiosity as to how the coaching situation would work out for this season. Icers' head coach Scott Balboni was still around and ready to finish out one last season with the Icers. But there was Guy, preparing everything and getting ready for the future. In early May, Gadowsky's shadow got bigger as it was announced that his assistant coaches from Princeton (Keith Fisher and Matt Lindsay) would be joining the Penn State coaching staff. Any concerns about this situation were put to rest this past week, when Balboni officially resigned as head coach of the Icers.

Balboni was a solid coach in his five years as the head coach of the Icers. Following in JoeBa's footsteps was going to be hard for anyone, and Balbs did a great job of keeping the team competitive as one of the top teams in the ACHA. His decision to step down now is a great reflection of Balboni's commitment to the team and Icers family, making sure that the transitions to the next step are as smooth as possible. As part of the Icers family, we thank him for all of the great work he did for the team, and wish him the best in all his future endeavors.

To help understand the junior hockey leagues a bit, most of the junior hockey leagues are considered amateur status leagues. The exceptions are the Major Junior leagues in Canada (QMJHL, OHL, WHL), which are considered professional leagues in the eyes of the NCAA. If kids are looking at the NHL as their immediate future, they usually find their way into one of those three leagues. If they want to pursue college prior to the NHL, any of the Canadian Junior A, B, C, or D leagues, and the USA's Tier 1, 2, and 3 leagues all provide the opportunity for a higher level of play before making the jump to the NCAA. As for the recent recruits, the USHL is the top (and only) Tier I junior hockey league in the US while the EJHL is a Tier III league. The SJHL and MJHL, are both Junior A leagues in Canada (and thus the ...umm...unusual names like Flin Flon and Waywayseecappo), which fall just behind the Major Juniors in Canada. So these are players from quality leagues that are already starting to make their way to Penn State. You can keep up with the full recruit class with my good friend Kyle over at ThankYouTerry. 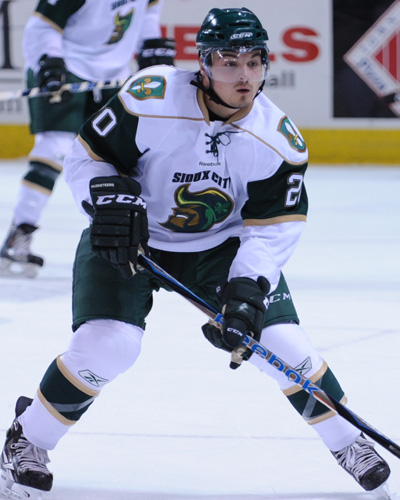 As for some final notes on Tommy Olczyk, he is indeed the son of former NHL player and current Versus/Blackhawks game analyst, Ed Olcyzk. While having a kid with name recognition wasn't a necessity, it is nice to see that there are former players and their hockey-playing kids that see great value in a Penn State education, as well as an ice hockey program that has yet to even actually begin playing at the varsity level. But Tommy is more than just a last name, as he was recently awarded the USHL's Curt Hammer Award. The award "recognizes the USHL player who distinguishes himself both on and off the ice by demonstrating outstanding performance skills, pride, and determination." So although Olczyk's numbers aren't the flashiest, he has shown himself to be a great leader both on (one year as captain, one years as alternate captain) and off the ice (heavy involvement in numerous charitable programs and events). You can read the full USHL press release here, and we're proud to have him, and all of the other commitments, as part of the Penn State family.

Women's Head Coach: While the men's team is getting all the press and focus, the Penn State women's ice hockey team has been going through the interview process to find their first head coach. While there has not been too much information out on the coaches interviewed for the position, we do know that current Lady Icers' coach Mo Stroemel was interviewed seriously for the position. The only other name that has been all-but-confirmed as one of the interviewees was Mercyhurst's Women's coach, Mike Sisti. If the selection process for the men's head coach is an indication, I'm certain that a very quality head coach will be brought in for the women's team. Still, I'm throwing my support behind Mo. Once the official word is released, I will be sure to bring you that update.