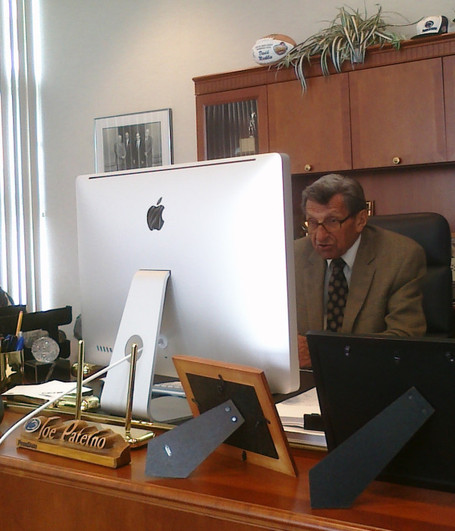 What? You thought he was going to use a laptop to Skype like the rest of us? Silly you. (Via JayTweet)

Clearly, Joe Paterno isn't wasting any time getting into the swing of using Skype to help bolster Penn State's recruiting efforts. We talked last week about how impressed some recruits were to be speaking with  the 84-year old on the cutting edge of communication and he still isn't letting up on his virtual efforts to lure young men to Happy Valley yet.

While Paterno has been using Skype for a few weeks, it was the first time Lewis had ever used it.

"It was really good," Lewis said. "It was pretty much the first time having a one-on-one conversation with him. It went way better than expected. He was telling me how very important I am to them and how I'm the No. 1 guy they are coming after right now.

"He was talking about the education I could get at Penn State and that he wants what is best for me. He said they need guys to get the ball to and that can make plays. He wants to contend for a national championship every year."

Lewis, who is one of the top wide receivers in the country, has received 23 verbal scholarship offers from some of the nation's top programs.

It looks like it ain't just a novelty, folks. Apparently, Paterno is serious about making this Skype thing work to his advantage, and that's great news for Penn State. Schools trying to use the "Joe Paterno is old and can't connect with you" argument as a negative recruiting ploy are going to have to rethink that strategy with the old man video chatting a mile a minute on a pimped out cinema style monitor.

The whole Skype thing is also firing up some recruits already in the fold, notably Camren Williams, who committed to the Nittany Lions in March. As Frank Bodani of the York Daily Record writes, Williams was so reassured by a Skype sesh with Paterno that he's now trying to serve as the Robin to his new coach's Batman on the virtual recruiting trail.

Camren Williams is becoming the new Derrick Williams, a player who recruits.

He's taken it upon himself to contact every high school junior who has been offered a Penn State scholarship. He's sent Facebook messages to a growing list that is pushing past 50.

He said he's developed at least some sort of relationship with close to 30 players Penn State wants, including the seven young men, like himself, who already have verbally committed to the school.

It's still early in the recruiting season and it's hard to say how all these new strategies will work for Penn State in the end. One thing is for sure, though. The criticism of his participation on the recruiting trail could die a quick death if Paterno continues to wow high school kids like this. No, Skype is not an in home visit, but hitting recruits with the 1-2 punch of an old man running the interwebs like a boss and a carefully crafted hand written letter is a pretty pretty potent combination if you're in a pinch.

And perhaps best of all, with every Skype success, Paterno further distances himself from the horror stories of last  year when he and his staff were rumored to be disorganized and in damage-control mode for much of the recruiting season. Now, he's making all the right headlines, something that will play well even with recruits who aren't getting the Skype treatment.