How the West(ern PA) Was Won

Share All sharing options for: How the West(ern PA) Was Won 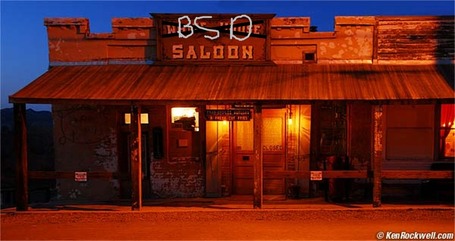 Scene: It’s 3 o’clock on October 26, 1881 inside a dingy bar in a small western Pennsylvanian town.  Eight men sit around a table sipping whiskey after a long day.

Peter Gray: I haven’t been with you long boss, but I just wanted to say ‘thanks’ it’s been great working for you.

Eric Gibson: *holds up glass* To the boss!

*The men raise their glasses and down their drinks*: TO THE BOSS!

*Dr. Nick jumps out of his seat, yells TAPIOCA!! and runs around the bar flapping his arms as if he was a big bird – no one seems to care*

Mike: You know guys, I think we’ve just about exhausted our limits here in this little town.

Kyle Martin: What do you mean?  We’re doing great.

Mike: I know, I know, but I think we can do so much more.  This town’s just not big enough for us.

Tim Aydin: Boss, I’ve been with you since the beginning and I think we still have work to do.

Galen Swyers: This is bullshit! *leans forward and stares at Mike* Think for a minute. We’ve got the locals under our thumb.  Why risk giving up a good thing?!

Mike: *glares at Galen* *talking with clenched teeth* Because I’m tired of putting in the work of three men for small beans.  It’s time to move ON!

Galen: Screw this, I’m out! *Heads for the door.  Dr. Nick now standing in the corner jumps on Galen’s back* TAPIOCA!!! *the two men exit.*

Peter: Should we go after him?

Mike: Naw. He’ll be back, every gang has an asshole.  He’s ours.

Scene: it’s late the same night in an upscale Saloon in a big western Pennsylvanian town.  Chris Grovich and Kevin Powers sit in the corner of the bar. Both men work for Blacksmith Shoes and Dirigibles; the east coasts finest proprietors of horseshoes and flying objects.  A man playing an old 1818 Gibson and Davis piano greets guests.

Chris:  *taking a sip of his Tia Maria and Diet Mr. Pibb* I’m starting to have doubts about this.

Kevin: Nonsense.  This is a peaceful town, you’ll do fine as the new Sheriff.  I wouldn’t be deputy if I didn’t think so.

Chris: Gentlemen.  How does the evening find you?

Ben: We made our sweeps, and everything is peaceful.

Chris: Good.  Anything to report?

Adam: No.  But I swear I heard someone yelling ‘Tapioca’.

Ben: I told you, it’s been a long day, you’re just hearing things.

*As the piano man falls to the floor and the music stops Galen grins and wonders ‘why is the piano man always such a pussy?  I mean it was one punch!’  But his attention quickly steers back to the task at hand*

*There’s a stunned silence.  Chris puts down his Tia Maria and the bartender slowly leans toward the rifle hidden under the bar*

*All eight men stand with their hands comfortable rested on their six shooters.  Galen looks at Mike and smiles*

Galen: *yanks both revolvers from their holsters*: FILL YOUR HANDS, YOU SONS A BITCHES!!!

*Galen starts shooting and hits nothing in particular.  The rest of the men follow.  Tables are overturned, people hit the ground and bullets are slung through the air like ink at a Columbus tattoo shop (awwwww… too soon??!?!)*

*Outside the alley is lit up from all the gunfire. Adam Collyer happens to be walking by on his nightly constitutional and despite all the fanfare, runs headlong into the bar.*

*Mike looks at him*

Galen: I think that went well.

*Mike slaps Galen on the back of the head*

And with that, the two legendary blogs have combined to start a new day.  The Penn State blogosphere will never be the same.