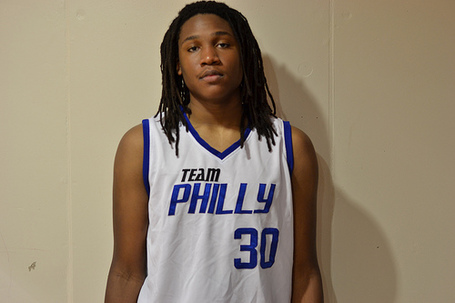 For the most part as you know, my work over here at BSD has been pretty much linkage. For those of you who followed me at Victory Bell Rings know that my corner of the internet was usually filled with basketball stuff. Since BSD isn't really in the habit of posting 5432321 recruiting updates, rumors and whatnot, I'm going to take my talents over to the fanposts.

Yes I'll still be doing real people articles on the front page, you should check that out on Thursday. But when it comes to quick hits of basketball intel , I'm going to throw them over here.

As you may have heard, Penn State is working with only a single scholarship for the 2012 recruiting class. This could change if Tre Bowman ends up off the team for good, but at this point Chambers has very little room to recruit.

Obviously that means our boy PC is going to need to make the most of what he's got. We'll go over a lot more of this later in the week, but for now all you need to know is Penn State has got a few guys close to committing. The newest of these players being Brandon Taylor. A 6'8 235 pound forward out of Tabernacle PA.

A 6-foot-8 power forward, Taylor averaged 12 points and nine boards last season for Trenton Catholic, and has been in touch with both Coach Chambers and assistant coach Dan Urgo.

"I visited Penn State last year, and we are also trying to schedule another visit sometime in August," said Taylor. "Right now my favorites are Penn State, Drexel, and Miami."

You've got to think that Penn State has an edge in this race. Miami has had so-so success the past few years, and with a new coach in the fold it is pretty much a fight for the better salesman. Penn State can offer a probable starting job and a chance to play with an exciting coach and do it in the Big Ten. Surprisingly Penn State has got a few good options on the table right now, but if anything, Taylor is the sort of player you want to see talking about coming to Happy Valley. His skills outside the 3-point line, and ability in the lane makes him the sort of player that isn't easy to guard. If Pat Chambers really plans on using a fast pace offense next season, a skilled shooting big man could be a crucial addition.

Taylor doesn't know when he'll announce so the news itself isn't earth-shattering, but it's the sort of news Penn State fans want to hear.

Taylor is a true mismatch problem who has the physical tools and basketball skills to score both inside and out depending on what the match-up dictates. He needs to continue to expand his skill set, sculpt his frame, and play the game inside out to maximize his potential.