Too Much Information 2011: The Alabama Edition

Share All sharing options for: Too Much Information 2011: The Alabama Edition

Everyone talks about football. But what about a look at the university, and the people behind the teams on Penn State's schedule? It could very well be Too Much Information, but that's just what we give you in today's TMI: The Alabama Edition.

When I sat down to write about Alabama the state and Alabama the school I thought to myself, "there are two ways to handle this Galen. You can relive your Nittany Line days and pepper this article with redneck jokes or you can take the high road and enlighten our readers without succumbing to the lowest common denominator. After all you live in central PA and really have no room to talk, just look at some of your neighbors." In the end I thought screw it, the redneck jokes are easy and I'm all about easy. Onward.

In the early 1800's Alabama's economy thrived thanks mostly to large cotton plantations which took advantage of Alabama's rich fertile oil. Unfortunately, like many Southern states Alabama suffered economic hardship from the American Civil War until World War II in part because of continued dependence on agriculture. Many people blamed personal hardships on the Civil War and to this day some Alabamians are still fighting the war (in their heads at least) which is why you would most likely be called a "Yankee" if visiting the state. In case you weren't aware, to anyone south of the Mason–Dixon Line a Yankee is a derogatory term for someone from the north, to anyone above the Mason–Dixon Line a Yankee is a New York baseball player. Following World War II, Alabama experienced growth as the economy of the state transitioned from agriculture to diversified interests in heavy manufacturing, mineral extraction, and technology.

Alabama is unofficially nicknamed the Yellowhammer State, after the state bird. Alabama is also known as the "Heart of Dixie". The state tree is the Longleaf Pine and the state flower is a Ford Mustang on cinder blocks.

In 1818, Congress authorized the newly created Alabama Territory to set aside a township for the establishment of a "seminary of learning". When Alabama was admitted to the Union on December 14, 1819, a second township was added to the land grant, bringing it to a total of 46,000 acres. The General Assembly of Alabama established the seminary on December 18, 1820 and named it "The University of the State of Alabama." Alabama opened its doors to students on April 18, 1831. The University emphasized the classics and the social and natural sciences. There were around 100 students per year at the University in the 1830s. However, as Alabama was a frontier state and a sizable amount of its territory was still in the hand of various Native American tribes, it lacked the infrastructure to adequately prepare students for the rigors of university education. Discipline and student behavior was a major issue at The University almost from the day it opened. Early presidents attempted to enforce strict rules regarding conduct. Students were prohibited from drinking, swearing, making unauthorized visits off-campus, or playing musical instruments outside of a one-hour time frame. Yet riots and gunfights were not an uncommon occurrence.

To combat the severe discipline problem, president Landon Garland transformed the University into a military school in 1860. As such, many of the cadets who graduated from the school went on to serve as officers in the Confederate Army during the Civil War. As a consequence of that role, Union troops burned down the campus on April 4, 1865. Are we seeing a pattern here yet? The University reopened in 1871 and in 1880, Congress granted The University 40,000 acres of coal land in partial compensation for $250,000 in war damages. The military structure was dropped approximately a decade after the school was officially opened to women in 1892.

Without doing a Google search; where did Crimson Tide come from and why is the mascot an elephant? Amazingly these are questions I've never investigated until now. In 1930 a sports writer by the name of Everett Strupper of the Atlanta Journal wrote an article about an Alabama-Mississippi game where Alabama coach Wallace Wade started his second string before bringing in the big guys.

"Coach Wade started his second team that was plenty big and they went right to their knitting scoring a touchdown in the first quarter against one of the best fighting small lines that I have seen. For Ole Miss was truly battling the big boys for every inch of ground.

"At the end of the quarter, the earth started to tremble, there was a distant rumble that continued to grow. Some excited fan in the stands bellowed, 'Hold your horses, the elephants are coming,' and out stamped this Alabama varsity.

Strupper and other writers continued to refer to the Alabama linemen as "Red Elephants," the color referring to the crimson jerseys.

That 1930 team posted a 10-0 record, won the Rose Bowl and were declared National Champions. The mascot is named Big Al, which for some reason brings another Big Al to mind.

As for the Crimson Tide, the first nickname given to the Alabama football team was "Thin Red Line." Hugh Roberts the former sports editor of the Birmingham Age-Herald used "Crimson Tide" in describing an Alabama-Auburn game played in Birmingham in 1907. The game was played in a sea of mud and Auburn was a heavy favorite to win. But, evidently, the "Thin Red Line" played a great game in the red mud and held Auburn to a 6-6 tie, thus gaining the name "Crimson Tide."

So there you have it, now it makes sense. Kind of.

It goes without saying but of all the tradition rich football programs Alabama is probably the tops. It also goes without saying that outside of Notre Dame, you will be hard pressed to find another fan base as arrogant. Need proof check out redelephants.com

What Is Alabama Football (some of my favorites)

It is walking into another team's stadium and having those fans hate you because you are from Alabama.
It is the pride you take in being every team's rival.
It is knowing that the SEC Championship is a birthright.
It is being respected and feared at the same time.
It is having enough pride to fight for your school but having enough class not to.
It is walking into a stadium and knowing Alabama will win the game no matter who they are playing because is just the way it is supposed to be.

Yeah they take their football very, very seriously in Alabama. Walk into a Piggly Wiggly in Tuscaloosa and yell 'Bear Bryan sucks' and see how long it is until you get punched in the groin. Just like Pitt, Alabama enjoys bragging about their 350* national championships although many of those came before I was born and one (1973) was awarded by the Coaches' Poll before Bama got beat by Notre Dame in the bowl game. Pretty much if Alabama recorded a first down in a season before the 70's they were given a national championship. Although I have to say probably their best championship team was the squad led by a VHT freshman named Jesus H. Christ in 18 A.D. 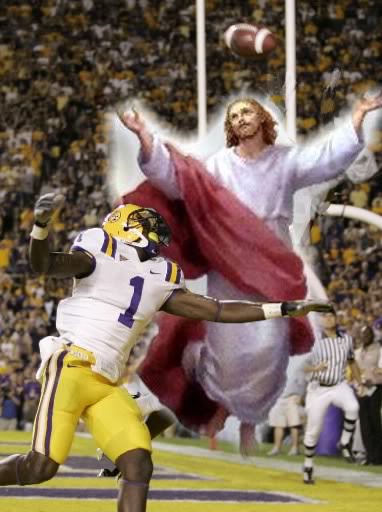 Here are just a few:

*I may have exaggerated a bit but you get my point

**So he didn't technically graduate from Bama. Still, you let him in, so he's yours, Tide