Ten Dollars To Burn: The Most And Least Accurate College Football Preseason Magazines

Share All sharing options for: Ten Dollars To Burn: The Most And Least Accurate College Football Preseason Magazines

OMG FOOTBALL SOON (seriously -- Big Ten Media Days are in the last week of July and fall practice is scheduled to start in the first week of August).  Until then, we're still in prime preseason magazine territory on the 2011 calendar.  Most of the mags are your standard, boilerplate issue with speculative fluff stories.  Others are detailed to the point of degrading intellectual harassment, filled with acronyms that the standard fan doesn't remotely care to comprehend.

(Another is specific to your favorite team and are written by people you know and love.  You should buy it now.)

Since 1993, one man has kept meticulous track of these magazines' accuracy: Ohio State partisan, Chris Stassen.  His site is an essential resource for any college football fan, not only for the preseason mag information, but also for researching head-to-head records, records against a particular conference, wins and losses over a span of years, and so on (thanks to a link-up with another database run by James Howell).  One particularly nice feature identifies which teams and conferences are overrated and underrated by comparing the preseason and postseason AP polls.

Here is the (incomplete) compilation for 2011:

Confidence remains high for the leftovers in Columbus, which is interesting.  Would've suspected a mass exodus to the Wisconsin bandwagon Winnebago after what happened to Ohio State this off-season.  Penn State is a solid third choice in PIG.  As for CORN, it seems to have fallen along the lines of what most of us also predict, although I'm a little higher on Iowa's and Sparty's chances than most.  We've seen Nebraska's 2011 schedule, have we not?

Ultimately, we can pick and choose information from the Stassen site all day long, but we're here for Penn State, right?  Of particular interest to me -- and you can take this in just about any direction in the comments -- is what was predicted prior to the Nittany Lions' most unforeseen results since 1993.

1997 (9-3):  Penn State was the clear #1 choice in the preseason, but blowout losses to Michigan (8-0) and Michigan State (4-4) torpedoed the season -- not to mention the eventual shorthanded bowl loss to Florida.

1999 (10-3): The Season That Got Away.  Penn State started on the cover of Sports Illustrated's preview issue as the #1 team in the nation, and the other magazines were right there with SI.  Wisconsin went to the Rose Bowl this year. Stassen's spreadsheet is too wide to copy, so you get the abridged version: 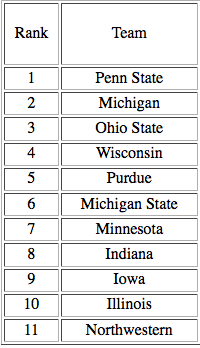 The Dark Years (2000-2004):  At the very least, the media saw some trouble on the horizon for PSU after the '99 team lost a significant number of players: 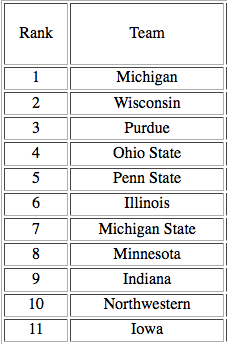 Michigan, Purdue, and Northwestern all finished at 6-2.

In 2001, Phil Steele picked Penn State to win the Big Ten.  Penn State!  Phil Steele!  #1!  I had to refresh the page multiple times to make sure.  Nobody else picked them to finish higher than sixth, which resulted in this: 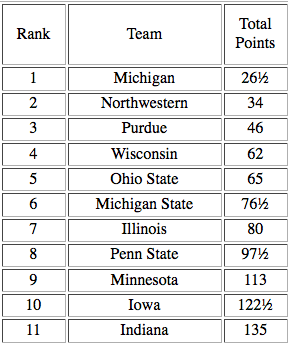 Steele took a chance and got burned, at least relative to PSU.  Despite this blunder, Steele was easily the most accurate overall in 2001.  Illinois was your Big Ten champion at 7-1.

Which brings us to 2005 (11-1).  The media predicted tiers consisting of (1) Michigan and Ohio State, (2) Iowa and Purdue, then (3) a cluster of Penn State, Minnesota, Michigan State, and Wisconsin, rounded out by (4) the Chumps' Trio of Northwestern, Indiana, and Illinois.  The Purdue pick (3-5) was a flop.

Who saw the Penn State renaissance coming?  Nobody, which still remains the beauty of the thing.  Not even we, the fans, really saw it coming.  All of the more prominent prognosticators had Penn State, at best, in the middle of the pile:  Sporting News, Lindy and Street & Smith picked Penn State to finish 5th; Phil Steele (T-6th), Athlon (8th) and others lagged behind.

Overall, according to Stassen's records, here is the preseason consensus of how Penn State was predicted to finish in the conference:

Seems that we're best when stalking from the #3 or #4 spot.  Adam Rittenberg notes a related trend in today's ESPN Big Ten Blog, at least in terms of the "official" selections that come from Big Ten Media Days.

The conclusion?  Vague accuracy without accountability is sufficient to satisfy our collective thirst for college football discussion when June and July come around (see also: anyone who writes anything about college football).  Also of note, Craig James allegedly killed five hookers during his time at SMU.

We're already Dustin Johnson-deep in the weeds here, so let's wrap this up.  If you want to attack the data in a different way in the comments, please do.