On the heels of Mike's well-written article yesterday that had the unfortunate 1:00 pm time slot, today's SDC looks at the opposite side of the ball. And like the defense, there are both great strengths and questions to answer before September 3 (or September 10, because...well, it's Indiana State).

Like Mike's post, this depth chart is not meant to be definitive, for a couple of reasons. Most importantly, I'm not on the staff and have no access to Joe Paterno's brain. These are speculative speculations. However, I think these are pretty safe, with only a couple of positions that could change in the next six weeks. Second, and I hate to even mention it, but that injury bug is a fickle insect, and has been known to strike at any moment. Pray to whatever power you believe in that the bug is done harming the poor Penn State football team.

So without further ado...

Before we get to the quarterbacks, let's address the strengths of the backs. Make no mistake about it, this is Silas Redd's team now. Stephfon Green has been a solid back and return man, but he was passed on the depth chart during Redd's freshman year in 2010. With Evan Royster on to the NFL (maybe), expect Redd to get the bulk of the carries during the game. However, Green is more than capable of spelling Redd where necessary and of carrying a series or two on his own if he's performing well. Green suffered a minor right shoulder injury in spring ball, but should be good to go by September. Add in Brandon Beachum as the bruising short yardage/goal line/everything else back, and the Penn State running back stable is pretty solid. 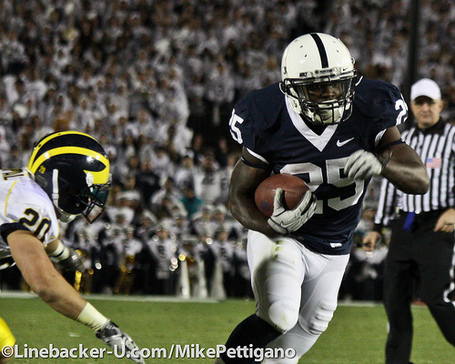 The fullbacks are similarly solid, though they are only two deep at the moment as Zach Zwinak continues to nurse his knee (ACL), which was surgically repaired last fall. Zwinak is the man of the future, but Suhey and Zordich have each more than proven themselves on the field.

Ah, the quarterbacks. I feel like we're in the exact same spot as last year. Each of the main two competitors (Bolden, McGloin) are a year older and arguably wiser, and this time around each has seen valuable game experience. After spring practice, Jay Paterno said that the staff "had an idea of who would start if there was a game this month" but obviously neglected to say which quarterback fit the bill. We don't have much else to go on; each quarterback has strengths and weaknesses, and the staff has a difficult decision to make. It would be nice to have stability among the team heading into the fall, so until then all we can do is guess. He won the battle last year as a true freshman and has had to undergo some serious growing up in one short year, so I'm going to give the edge to Bolden here. He has the greater upside and has, according to the good Doctor, turned a new leaf.

The wide receivers should be a strength for whichever quarterback is under center, as Moye and Brown ended 2010 as the starters and lead a pretty deep crew. Expectations are high for Moseby-Felder and Kersey. Zanellato and Robinson are likely redshirt candidates unless needed. In the slot, Curtis Drake would be the starter but for a nagging leg/bone injury. Contradicting reports exist as to whether Drake will be ready for the season (Drake says yes, Paterno says no), but if he is, he almost certainly moves to the top of this depth chart. If he is not, though, Smith and Belton should be fine replacements. Belton appears to be made for this position (and some sort of return role along with Alex Kenney), while Devon Smith is a speed demon that seems to need to learn how to keep his legs under him. 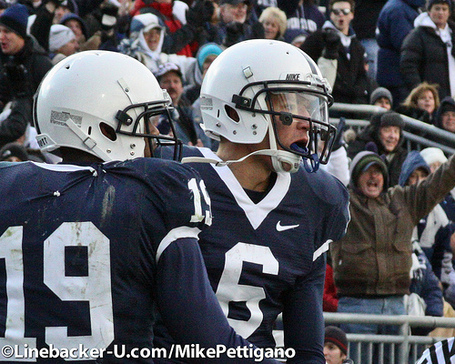 Tight end, unfortunately, is a different story. Kevin Haplea saw action in 12 games as a freshman in 2010 and should be the starter for the remainder of his time at Penn State. But beyond Haplea, things are tricky. Garry Gilliam and Andrew Szczerba are battling injuries, and Szczerba especially is in danger of missing his final season of eligibility with back issues. Nate Cadogan is a converted tackle who will likely be moved back down the line once the position is sorted out. Finally, Kyle Carter is a true freshman who might be forced into action before he's ready.

And now, for projecting the most difficult portion of the depth chart, we present the offensive line. I'm fairly confident in my starting five, with only the RG and C positions really up for grabs as Stefan Wisniewski and Doug Klopacz are no longer with the team. Okoli and Barham locked down the tackle spots by the end of the year, and Troutman is in his final year, and his final opportunity to show he's the left guard everyone expected when he signed with PSU over Ohio State in 2006 (greyshirted to 2007).

Beyond them, the other linemen are a mix of players who we've waited on to live up to big recruiting hype (Eric Shrive), lower rated guys who are really impressing in camp (Alex Mateas), and freshmen with big expectations (Donovan Smith, Angelo Mangiro, Ryan Nowicki). Most of the guys in the "Reserve(s)" row can and will rotate positions until they find the one that sticks. As for eligibility, though, three of these projected starters will be gone after 2011, so hopefully (again) some of the younger guys can step up quickly.