Welcome one and all to the first version of Friday Recruitin' at the new Black Shoe Diaries. For those that aren't familiar with the series that is coming over from Linebacker-U.com, each week we'll take a look at the top prospects at each position and speculate on who might be the next commit and when that siren might ring again. For those of you familiar with the series, now that we're on BSD, things are going to look a little different.

Rather than a general link dump of all things recruiting, the outline you see below will be published each week. It might not change from week to week, especially during the slower summer weeks. But it will keep you up to date on who the staff is looking at and roughly how many spots we have left at each position. There will still be some links included so that you can keep tabs on the enemy, but the purpose of this weekly post is to facilitate discussion among the recruiting fans out there.

This week, the obvious big news is the commitment of PA QB Skyler Mornhinweg, and with that commitment, another position in the Class of 2012 has likely come to a close. Cam Williams and Nyeem Wartman have already shut the door on linebackers in this class, and Mornhinweg will almost certainly be the only true quarterback to commit to the Lions. I say true quarterback because NJ ATH Devin Fuller is still out there, and Penn State is still trying really hard to get him in this class. He has been told by the staff he will get a shot at quarterback if he comes to Penn State, but my guess, along with most others, is that Fuller's future in college is not under center.

Wait, where's the Babe? Regular readers of Friday Recruitin' will remember that we always led off with the Friday Recruitin' Babe, a scientifically selected woman that we were smitten with that particular week. Unfortunately, due to the massive entity that is SBN, we are limited in what photographs we're legally allowed to use. We're lucky to have Mike's copyrighted action shots, but he doesn't happen to have any of Brooklyn Decker or Kate Upton. So until we can figure out a way to continue to bask in the beauty of Kristen Bell or Zooey Deschenel, you'll have to settle for just recruiting news. 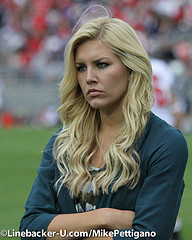 Penn State Class of 2012 commitments listed above each group in bold with commitment dates.

Quarterback (2012 Quota: 1-2)
Skyler Mornhinweg (PA, 7/19/2011)
1. Devin Fuller (NJ)
Analysis: As stated above, Mornhinweg's commitment closes the door on this position, at least to any recruit not named Devin Fuller. Should Fuller choose PSU, he'll get his shot.

Running Back (2012 Quota: 1-2)
1. Will Mahone (OH)
2. Akeel Lynch (NY)
3. Brionte Dunn (OH)
4. Drew Harris (PA)
Analysis: Penn State is reportedly once again out of the Drew Harris running, after what appeared to be a brief run at the PA back. Akeel Lynch is currently committed to Boston College, but has said he will likely visit Penn State in the near future. Will Mahone is the top target here, with an outside chance for currently-committed-to-OSU Brionte Dunn.

Wide Receiver (2012 Quota: 2-3)
1. Eugene Lewis (PA)
2. Canaan Severin (MA)
3. Joel Caleb (VA)
Analysis: Severin and Lewis are the top targets, and WR recruiting will close if (when?) they both commit. Caleb is also being recruited as an athlete, so if the WR recruiting fills up, he could easily fill a DB spot. Getting him out of Virginia will be difficult, as he’s high on both in-state schools.

Linebacker (2012 Quota: 2-3)
Cam Williams (MA, 3/25/2011)
Nyeem Wartman (PA, 7/9/11)
Analysis: This position is done for the year. Solid group, but even more special when you consider the fact that Cam Williams has become one of the better recruiters for the staff.

We'll continue with the relevant links and opponent news next week. The above analysis will appear every week, modified as needed, so we'll stop here for now. Enjoy the weekend - less than two weeks to fall practice!