Success With Hyperlinking Is Tackling Its Way To The Top

Share All sharing options for: Success With Hyperlinking Is Tackling Its Way To The Top

Starting out close to home. I don't think it's been linked to around these parts yet, but last week our very own Michael Mauti sat down with Urban Meyer to talk about Penn State, Joe and leadership. Well done, lad. After this interview, Mauti form-tackled every living thing on campus.

HAHAHAHAHAHAHA OH MY GOD I CAN'T BREATHE. Remember our old friend, Tate Forcier? Well he's been on a bit of an adventure trying to find somewhere to transfer to, as a Forcier is want to do every so often. As it turns out, he's somehow found a way to get into Michigan out of high school yet somehow not academically qualify at Hawaii. For his part, Forcier seems unfazed, and is devoting his time to some of his other interests. 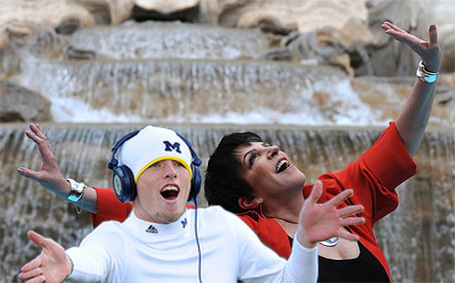 Umm. What? The Longhorn Network's scramble for content is likely to include televised game's of recruits that Texas is chasing, including some from out of state. That would seem to fly in the face of the NCAA bylaw that prohibits schools from providing recruits with publicity (Granted, LN would never say that they're showing a high school game because one of Texas' recruits is playing in it, but any high school game worthy of being shown on a national television network would have to be full of prime talent, and the chances of Texas not being after at least one player in that situation is almost nil). To say that this development has alarmed Texas A&M fans would be an understatement, but Peter at Burnt Orange Nation correctly states that jumping from the Big 12 to the SEC probably isn't a great idea for the Aggies.

And in news that broke literally as I was writing this, Big 12 commissioner Dan Beebe told Texas that any plans they had for putting high school games on Longhorn Network are scrapped for now.

Speaking of possible recruting violations. The use of the term "bag man" in all of this makes me giggle uncontrollably. No really. I keep envisioning this scenario where Bobby Lowder meets Cecil Newton underneath an overpass in Birmingham in during a thunderstorm and pays him in unmarked, non-sequential bills arranged haphazardly in a paper shopping bag. If the NCAA really and truly has found the person that A) paid for Cam Newton's commitment to Auburn, and B) is willing to roll over on Auburn, then I would expect the NCAA to make Auburn go boom with all speed. As you may have noticed, however, that's a lot of ifs. Hey Joe, thanks for not paying hundreds of thousands of dollars in order to sign players. Pretty chill of you.

A guy can dream, can't he? If you took this article and did a find/replace for "Mississippi State" for "Penn State" and "SEC" for "Big Ten," what you'd have is the one document most likely to make me pass out from pure joy (After Joe retires, naturally). Also, if such a thing transpired I would call PAWWWWLLLL Finebaum the next day and uncork the single trolliest piece of UMADery ever heard. I LOVE YOU DAN MULLEN AND I DON'T CARE WHO KNOWS IT.

I'll have one million. LSU is going to have an official beer starting this fall, a blonde ale that sounds positively refreshing on an unrelentingly hot and humid day such as this. The finished product will be the result of a combined effort between the university and Baton Rouge's Tin Roof Brewing. I wish more schools would think about doing this [glares towards State College].