Success With Hyperlinking Suffers No Fools

Share All sharing options for: Success With Hyperlinking Suffers No Fools

Thanks to everybody for making this week, despite our occasional and predictable squabbles, a great first week for the new staff here at BSD.  Here's a helping of Saturday links and an open thread for your troubles.

The Tooth Fairy Awaits You Back In The Huddle.  I love trick plays.  Love the hell out of 'em.  But the "hey coach, wrong ball!" trick that permeates Pop Warner and Junior High football should result in a mandatory catapulting into the sun for the entire coaching staff.  Bound them together, dip them in honey, release the bears, catapult the remains into the sun.  Which is why, despite caring being creepy and all, Penn State needs to send a coach to Fort Lee, Virginia, find #43 Troy Hattori, and offer him a scholarship, stat.  Look at the big brain on Troy:

You are an American hero, little killa.

A Sad Trip Back In Time.  JPDH looks at the sordid season of 1988, which started with relative promise before ending in Penn State's first losing season since 1938.  Spoiled?  Yes, we were spoiled silly and rotten.

Ohio State Escapes The Noose.  The NCAA has concluded that Ohio State won't get run up with the dreaded Lack of Institutional Control or Failure To Monitor violations, meaning that they'll likely get away with relatively minimal punishment for the Tats and Trinkets scandal.  Eleven Warriors reaction. Case summary report here.  Alternative Eleven Warriors reaction here. 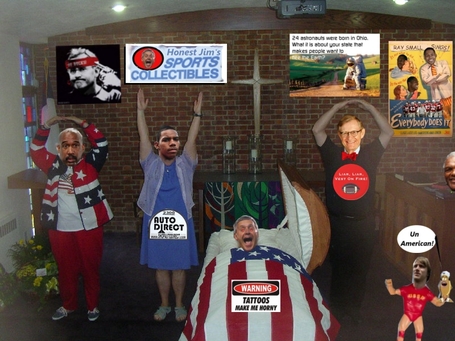 (Nobody reads the fanshots.)

Growing Up Is Hard To Do.  Lions 247 caught up with former PSU defensive lineman Ed Johnson last week, and he reflected on his maturation process since his days in Happy Valley:

It opened my eyes to a lot of things. It opened my eyes to a lot of outside things, to the real world. There were a lot of childish things, I had to grow up a lot. There were a lot of things that were just unlucky. Some things happen where I could honestly say I was innocent or it wasn't my fault, but that's just how life is sometimes. I think it helped me become a stronger person. It taught me that I could go through some things, I know God has my back and with him I'm straight. I don't have to worry about anything.


THIS GUY Can Throw The Ball.  Not enough Skyler Mornhinweg info yet?  Here's a breakdown of his film from Rivals.

Sugar High.  Off Tackle Empire breaks down the non-conference schedule for the Big Ten. Week One; Week Two.

Crucial Indiana State News That CHANGES EVERYTHING.  Needless to say, football news out of Terre Haute isn't exactly flowing at this point, but here's a note about a Michigan State transfer trying to make a name for himself on the FCS level.  You're, um...welcome.