It's 1970, And Penn State Still Needs A Starting Quarterback

Share All sharing options for: It's 1970, And Penn State Still Needs A Starting Quarterback 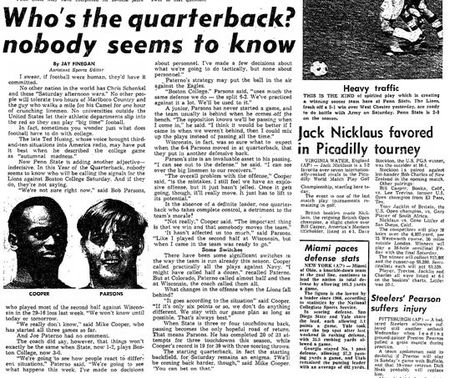 No one position on a football team is more important than the quarterback. A good quarterback can carry a team from the brink of defeat and pull off a last second victory. He can make plays with his arm, or tuck it and run with his feet. A good quarterback is not only critical for his on field abilities but his ability to set an example off the field as well. Whether it's taking responsibility for a bad loss, or sharing the credit when the team picks up a crucial victory, a quarterback can control the moral and pulse of a team with his words and actions. Because of this, no player is second guessed more than the quarterback, and no player has a more difficult job than the starting quarterback.

For Joe Paterno, he has had the unenviable responsibility of picking the starting quarterback since 1966. From great ones like Kerry Collins to those like Anthony Morrelli who couldn’t quite live up to expectations, Paterno has seen them all battle through preseason camps with their fellow teammates for a starting job.

Over the next series of posts, I’ll be taking a look at some of the more interesting quarterback competitions in Penn State history. To do this, I'll be using old issues of the Daily Collegian dug up from the Penn State archives. At the end we'll take a look at today's quarterback battle between Rob Bolden and Matt McGloin.

In the great history of Joe Paterno, 1969 may have been the season that truly turned his coaching career around. With a dramatic 10-3 victory over Missouri in the Orange Bowl, Paterno would guide the Nittany Lions to two straight undefeated seasons after starting off his coaching career with a 13-7 record. As Penn State’s national reputation grew, so too did the pressure on Paterno to keep winning.

Continuing this success however wouldn’t be easy. With two year starting quarterback Chuck Burkhart gone after graduation, Joe Paterno was looking to find a leader that could fill the shoes of one of Penn State’s all-time greats.

For almost every Penn State fan, Mike Cooper, who had spent the past two seasons as a backup to Chuck Burkhart seemed to be the clear choice. Despite Burkhart’s undefeated record as a starter, many Nittany Lion faithful were unimpressed with Burkhart’s short stature and his sometimes questionable decision making on the field. Cooper had pushed Burkhart in spring camps to the point that both players practiced with the first team, neither of whom knowing who would get the starting job until the week before the first game. For many fans, Cooper was the obvious choice.

Even with Cooper’s past and experience in mind, Paterno was reluctant to name a starting quarterback. This made it a three-way quarterback race between Cooper, junior Quarterback Bob Parsons and darkhorse candidate, sophomore John Hufnagel.

Like all good Penn State quarterback races, it went well into the summer, Paterno never budged when it came to giving an answer, and the players continued to march towards the season as though they would all be getting the starting nod. Finally, at the last possible moment the choice was made. Mike Cooper, the fan favorite would make the start against Navy in the home opener and the beginning of a new era in Penn State football.

The honeymoon didn't last long however. With the style of play Cooper and Parsons brought to the table, Paterno spent most of the first five games of the season letting both players play substantial minutes. Cooper would air the ball out while Parsons used his accuracy to try and pick apart defenses. With no true starter on the roster, Penn State quickly fell to 2-3 and looked to be in freefall.

Then the change was made. John Hufnagel, a sophomore most Penn State fans had never heard of rose out of the ashes of the roster and started against a talented Army team, winning the final five games of the season. It was a surprising turn of events in a season of struggles, but one that paid off almost immediately. 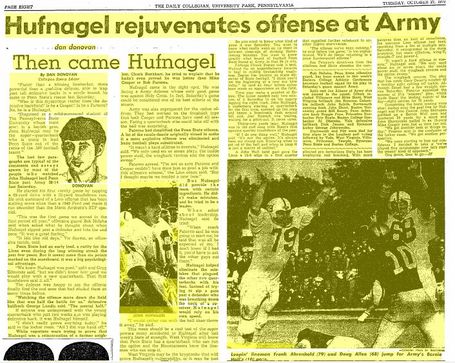 In the end Hufnagel provided the Nittany Lions with the spark that they needed, and was able to salvage an otherwise dismal season. Hufnagle would go on to start for the Nittany Lions for the next two years, leading Penn State to a 26-3 record that included a 30-6 Cotton Bowl victory over Texas. Hufnagel finished 6th in the 1972 Heisman voting after being the first Penn State quarterback to throw for over 2000 yards in a season.

Interestingly enough, Parsons was later drafted by the Chicago Bears as a punter in the 1972 draft, while Cooper graduated from Penn State without starting another game

Stay tuned the rest of this week, as we look at more of Penn State's most infamous quarterback controversies.