Ooooh, Pretty Colors. Thank You Terry has sketchwork of the Pegloo: 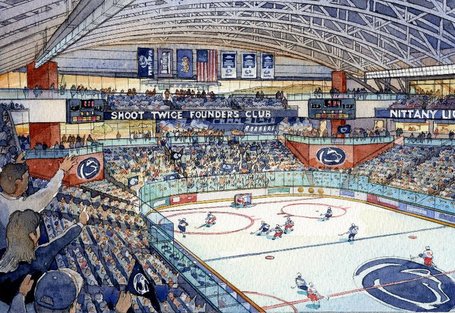 Head over to TYT for many more.

After speaking with the Penn State coaching staff while they were at Princeton, contact continued after the change between schools. Varley was speaking with coach Fisher before coming up to visit the campus, a trip that turned out to be a dealmaker. "I went up and spoke with all of the coaches. I loved the campus, loved what I heard from coach Gadowsky and just felt very comfortable there. "They showed me the layout of the rink, it is just unbelievable, and playing in the Big Ten as well, I think it will be the best league in the country. Great coaching at a great school in a great facility against top-notch competition, I really liked everything they had to offer." Though Varley will not be coming to campus for two seasons, he will be a part of the first Penn State hockey team to compete in Big Ten conference play starting in 2013-14.

And for those of you old-time hockey fans:

More More More More.  Look, we have to learn these names at some point.  Check out TYT's profile of incoming Mercyhurst transfer Taylor Holstrom, who will play for the Icers this season as his NCAA "sit-out" season. Over at Lions 247 (surprisingly steady hockey coverage, by the way), a profile of self-described "power forward", Jonathan Milley:

As a part of the Pembroke Lumber Kings, Milley helped his team to Ontario’s Central Canada Hockey League regular season title. From there, the Lumber Kings took home the Eastern Division title, advancing to the Royal Bank Cup, featuring the five best Junior A hockey teams in all of Canada.

This is where Milley did his best work, tallying a Royal Bank Cup high seven points, including the only two goals in the final to defeat the two-time defending champions, as well as being named to the tournament’s all-star team.

Kabletown Strikes! Versus (in the midst of a rebranding as part of NBC Sports Group) might jump on the college hockey train as soon as this upcoming season.