Another week, another commitment, this one in the form of New Hampshire defensive back Jake Kiley. This particular commitment has me torn: on one hand, he's a defensive back, which is certainly a position of need. In fact, one of the BSD managers/editors/authors actually tried to be a walk-on defensive back for Penn State in his time there (can you guess who?), and probably could have made it next year.

On the other hand, he's a camp offer with no other Division 1 offers who isn't rated by any of the services. He camped at both UConn and Massachusetts and neither offered, and then camped at Penn State and was offered a 2012 scholarship, which he accepted on Tuesday. The staff saw something that the other, lesser programs didn't see, so I've got some hope. But this is an offer that most likely could have waited, even moreso than a couple of the other camp-offers-turned-commits, Derek Dowrey and Austin Johnson. But they're all on board now, so the players deserve our full support. The coaches, on the other hand, continue to perplex many fans.

Which brings us to this week's talking point: current and recent defensive back recruiting... 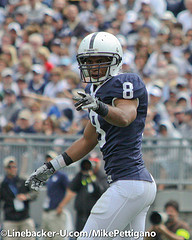 We touched on it a lot during the Kiley commitment thread, but let's recap. In the 2009 recruiting class, Penn State took five players still on the secondary's depth chart. Since then (two full classes and roughly half of this current class), only one defensive back (Adrian Amos, '11) signed a letter of intent, while another is now set to sign one in February. They made the effort with Shyquawn Pullium, but he is now headed to JUCO, leaving the secondary dangerously thin after this season. It should be noted, though, that there are one or two wide receivers that could end up making the switch (Alex Kenney).

This year, as shown below, the staff is after another big defensive back haul. With Kiley on board, there are likely three (maybe four) spots left for defensive backs. Landing Armani Reeves from Massachusetts and Demetrious Cox from Pennsylvania would be great additions, and Penn State appears to be high on both. However, neither are sure things and missing on either (or both) would be...well, not good. Other prospects are out there (Malik Golden's recruitment hit a hiccup last weekend, but all seems to be back on track), and I'm sure the staff could fill out their defensive back quota without Reeves and Cox. But let's just hope that doesn't happen.

With that out of the way, on to the Big Board...

Penn State Class of 2012 commitments listed above each group in bold with commitment dates.

Quarterback (2012 Quota: 1-2)
Skyler Mornhinweg (PA, 7/19/2011)
1. Devin Fuller (NJ)
Analysis: Devin Fuller will be the only quarterback left in this class. If he chooses Penn State, he's been promised a shot at QB, but his future on the field is likely at another position.

Running Back (2012 Quota: 1-2)
1. Will Mahone (OH)
2. Akeel Lynch (NY)
3. Brionte Dunn (OH)
Analysis: Akeel Lynch is currently committed to Boston College, but has said he will likely visit Penn State in the near future. Will Mahone set, and then rescinded, an announcement date of August 7. Brionte Dunn was on campus ($) on Wednesday, but given the weak punishment likely to be levied against Ohio State, he won't drop his Buckeye commitment.

Wide Receiver (2012 Quota: 2-3)
1. Eugene Lewis (PA)
2. Canaan Severin (MA)
3. Joel Caleb (VA)
Analysis: Severin and Lewis are the top targets, but the big Massachusetts receiver is taking additional visits ($) and worrying Nittany Lion fans. Caleb is also being recruited as an athlete, so if the WR recruiting fills up, he could easily fill a DB spot. Getting him out of Virginia will be difficult, as he’s high on both in-state schools.

Linebacker (2012 Quota: 2-3)
Cam Williams (MA, 3/25/2011)
Nyeem Wartman (PA, 7/9/2011)
Analysis: This position is done for the year. Solid group, but even more special when you consider the fact that Cam Williams has become one of the better recruiters for the staff.