On Joe Paterno, the Penn State Way, and the Future of the Program

Share All sharing options for: On Joe Paterno, the Penn State Way, and the Future of the Program

Joe Paterno keeps putting Penn State fans in a difficult situation. On the one hand, Paterno represents more than the game of football. His contributions on and off the field have changed the lives of thousands of student athletes and fans across the globe. He has helped grow the university into what it has become, defining what it means to coach true student-athletes. To focus solely on the future of the program would be to miss the final years of a coaching career the world will never see again.

And that is ultimately the paradox Joe Paterno has built around the Penn State football program. To appreciate the career of a legend, while focusing on an inevitable changing of the guard. To ignore one of those would only damage the other, and it's that balancing act that has prevented any true progress within the program. In a world of high-speed internet and text messages, Paterno has effectively frozen one of the nations most successful athletic programs as he dismisses any discussion of his retirement. A program with no true road map, is a program doomed to never truly find long term success.

In the end, this is not a call for Paterno's two-weeks notice, but rather the acknowledgment that Paterno is not the coach he once was. That while Paterno may be well loved, and while he may love Penn State, he is walking the line of graceful retirement and a messy ending. Planning For A Later Date

This is where the athletic department comes in. On the surface it may seem as though Penn State has gone along without so much as a plan to deal with a post-Paterno era. In a lot of ways though they're showing us their plan as we speak. Marketing, money, and coaching.

From a logistics standpoint Penn State has already transitioned Paterno out of their marketing strategy. Early on in the Dark Years, athletic department productions shifted from a Paterno focus to one of  Penn State football as a brand. No longer was the program leaning on the aging shoulders of their coach; Penn State football stood up well on its own. Where TV shows in the mid 80s would feature Paterno speaking about the previous week, the Penn State football story looked at the background and childhood of the athletes themselves. A quick rundown of the press conference might make up for 30 seconds of a half hour program. But people no longer watched for Paterno, they watched for the team. Paterno has since become less and less integral to Penn State Football: The Brand. Certainly Paterno still provides the University with a fitting top to their totem poll, but the foundation of the program is no longer found within the Paterno household.

Financially, Penn State has taken a gamble that they plan on winning. No matter how unpopular the STEP program might be, it is setting up for what Penn State would call "A hot ticket". The student section moved behind the endzone, opening up for public and cooperate shifting to fill in almost 15,000 seats of prime viewing. With increased ticket prices, and improved seating, Penn State cannot risk to make a "safe hire" when it comes to the post-Paterno era. And they know it. It is a program set up for a big hire. High priced tickets don't sell for a so-so program. A big name, a big game, and a big win will change the tune in a hurry. 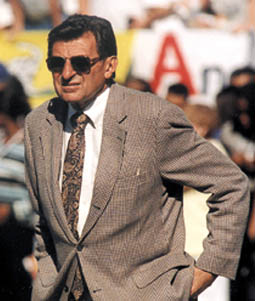 "Success with Honor" is a slogan Penn State throws around as often as Nike tells you to Just Do It. Considering that Stanford and Penn State are the only two Division 1 schools to have never committed a major NCAA violation, it isn’t as though they can’t back up their claim. Being able to win, and win without cheating is sadly something that is becoming all too rare in modern day athletics

But what are the parameters of "Success with Honor?" What defines that statement? At what point are you no longer succeeding with honor?  Any violations? 2 violations?

This opens up a dialog regarding the meaning of the Penn State way. And this is where the issue lies. Penn State fans, in the very near future, will need to decide where in the sand the line is drawn. More importantly, they will need to tailor their expectations if a coach who fits their strict moral code doesn’t have the on field ability.

This isn’t to suggest that Penn State should succumb to the "Everybody does it" principle. There are plenty of coaches in the country, and in the Big Ten with relatively clean records, but if Penn State fans are going to adhere to a zero-violation policy it may be difficult to adequately to satisfy all of their expectations.

For the sake of the conversation, take Urban Meyer. Meyer has found his name bouncing around the internet in connection to Penn State, and as expected, SEC hatred and traditional SEC recruiting scandals have turned a lot of people off to the idea of Meyer taking over for Joe Paterno.

In the case of Urban Meyer almost everything makes sense as to why he'd want this job. He's healthy, he's rested, and Happy Valley provides him with a sleeping giant tucked away in the hills of the east coast. Meyer would go from massive media pressure to having to deal with Cory Giger. As a student of the game, and a molder of men, Meyer would be lying if he said it didn't interest him a little.

For a lot of Penn State fans though, Meyer isn’t good enough for the program. Florida had 4564.9 arrests while Meyer was coaching at Florida, and while Meyer is to blame for some of these problems, the Florida program itself has done nothing but win and hadn't committed a major violation under his stay. There is something to be said for how the Florida program has been perceived over the past few years, but Meyer’s name is clean in the NCAA’s eyes. 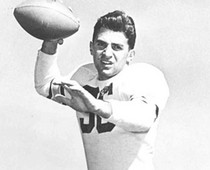 That could be Penn State fan’s biggest problem. Lots and lots of people see a post-Paterno program as a chance to awaken a sleeping giant. That 10-12 win seasons could become the norm if the right hand was put behind the wheel. But who? Al Golden and Pat Fitzgerald have been name-checked more than a few times, but there isn’t any actual data to support the idea one or the other would suddenly turn Penn State into a powerhouse. That isn’t to suggest they can’t, but these are the only coaches who are deemed fit to serve by many Penn State fans. Bring up a big name coach like Meyer and every single aspect of their life and previous coaching jobs is put under a microscope. It is almost as if Meyer would suddenly take over a program and run it into the dirt on his first day.

In the end, this isn’t an exposition on the greatness of Meyer. The point is to juxtapose the Penn State fan’s expectation on the field, with their desire to find Joe Paterno 2.0. A coach with a perfect background and the ability to take the program to the next level. At the end of the day, that coach might not exist anymore.

Which brings us back to success with honor. Success with honor means approaching your job with an honest attitude in an attempt to mold young men and women into the sorts of people Penn State has turned out year and year again. It doesn’t mean that the only man for a Penn State job is one who has led a sinless life of a Boy Scout. If Penn State fans want to see the football program move forward in the future, it might be time to recognize that. Joe Paterno may be holding captive Penn State's football program. However, should an Urban Meyer some day come calling, Happy Valley shouldn't be too quick to show him the door.