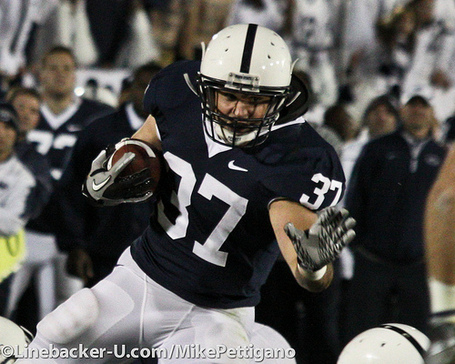 Fullbacks aren't the flashiest ballcarriers on the field. They're not even used all that much anymore by most football teams. But fullbacks are uniquely "Penn State," from Franco Harris to Steven Smith, Matt Suhey to Jon Witman, Sam Gash to Brian Milne. The word "fullback" probably won't spark the same memories or images as, say, "quarterback" or "linebacker." But reading those names--just a few of the best Penn State fullbacks to play the game--will equally likely give you a sense of "oh yeah, that guy was great."

Last season, Penn State fullbacks Joe Suhey and Mike Zordich developed into a duo that has the chance this season to rival that of Whitman-Milne in 1994 and 1995. Both featuring unique skills from the fullback position, Suhey fills the role of a more modern fullback, catching the ball and pass blocking; while Zordich is the old-school fullback, running dives on the goal line and lead blocking like the best of them.

Penn State has a great problem for 2011: How can they get these two players more involved with the offense?

Regardless, the Suhey-Zordich tandem for 2011 has an opportunity this fall. And with Joe Paterno and the offensive staff already coming out publicly proclaiming they're going to get more involved and creative this season, it looks like the two fullbacks have a lot to look forward to...

If you haven't heard it the first 500 times it's mentioned on ESPN broadcasts, Joe Suhey comes from a long line of Nittany Lion football players. His father, Matt, was a standout running back at Penn State from 1976-79 before starting a highly-successful career with the Chicago Bears. His great-grandfather, Bob Higgins, was Penn State's second All-American, garnering honors in 1915 and '19 and served as head coach from 1930-48. Joe's grandfather, Steve Suhey, was a letterman at guard in 1942 and again in 1946-47, earning All-America honors his senior season.

Suhey has obviously become the receiving thread out of the backfield. He's been fantastic on not only screen plays, but really great on wheel routes down the sideline. He is the default "starting" fullback, but shares time in the backfield with Zordich. Suhey's build is more suited to be this muli-threat fullback, as he is about 30 pounds leaner than Zordich. This gives Suhey more mobility and speed to work in the open space. In 2011, with so many threats on the offense, it would seem that Suhey's roll as a receiver would diminish. That's hardly the case. Suhey offers Penn State one more weapon for opposing defenses to have to worry about, and he's proven his worth as part of this offense. 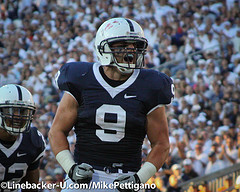 Mike Zordich is another legacy Nittany Lions, as his father was an All-American safety in the mid-1980s. Coming to Penn State as a highly-rated prep linebacker, Zordich was in line to become another great at Linebacker U. He even wore the No. 31 jersey for a season. But in mid-2009, Zordich was transitioned to running back, and has thrived ever since.

As you can see from his stat line, he's not the versatile athlete Suhey is for Penn State. But that's hardly a knock on what Zordich contributes to the offense. His hard-nosed style and superb lead blocking ability offers up a more traditional profile for a Penn State fullback. Zordich is best when in the I-formation, either run blocking for the tailbacks, or when called upon to run a fullback dive near the goal line. All of his touchdowns were scored on fullback dive plays, which Joe Paterno has said is his favorite play to run inside the 3 yard line.

One of the best intangibles for Zordich has to be his emotion on the field. The photo above was one of my favorites from the 2010 season. It wasn't even on Zordich's touchdown that came two plays later. It was on the 9-yard dive play you'll see in the clip below. If Penn State is going to exorcise the demons of last season, bringing this kind of positive emotion to the huddle will be key.

Best of the Bench

Zack Zwinak and Pat Zerbe are the two most likely to make noise behind Suhey and Zordich. Zwinak is the heir-apparent to the fullback position, coming out of high school as the No. 1 fullback prospect in 2010. He was redshirted last season, due to injury. Zwinak has apparently had a longer recovery than expected, so we may not see him again this year. Zerbe was on the practice team last year, but did play in the bowl game. Behind then, Andre Dupree and P.J. Byers probably won't get on the field in 2011, but if one were to do so, I'd put my vote down for Byers, the former Navy diver who's become a very nice story.