I'm not going to sugar coat it: 2010 was a complete disaster for Penn State tight ends. Andrew Szczerba was expected to be the starter after Andrew Quarless and Mickey Shuler left for the NFL, but never played a down due to a back injury. Garry Gilliam tore his ACL against Iowa, an injury which caused him to miss the remainder of the season. Kevin Haplea was forced into heavy action as a true freshman and wasn't much of a factor in the passing game. Even Nate Cadogan (tackle) and Brett Brackett (receiver) saw time at tight end to help fill the void. Basically, if you were a Penn State tight end last year, you had some hardship befall you.

Having a productive season from the tight ends would be huge for Penn State this year. It's often said that a reliable tight end can be a young quarterback's best friend, as they can act as a safety valve for a quarterback under heavy pressure. The question is which tight end will climb out from the rubble to become contributors? Let's take a look.

Career Stats
The Overview
Szczerba was supposed to be the guy last year before his back betrayed him. If he's healthy this year, I think he gets the nod as Penn State's number one tight end due to (A) experience, and (B) blocking ability. As of a few days ago, everything seems to be going well on the health front. However, as someone with a long history of back issues, I know just how quickly the whole thing can go south. Fingers crossed that it doesn't happen to Szczerba.
Anything Else?
Not really. There's not a lot of numbers or tape to go on here. Just stay healthy, dude. 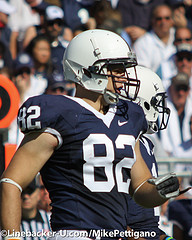 2010 Stats
The Overview
Kevin was forced into playing a lot of snaps before he probably should have. I'm not sure if it was due to his lack of experience, or the lack of experience/general craziness going on with the quarterbacks, but Haplea was an afterthought in the passing game. He's a decent blocker, but he'll get better as he gets older and more experienced. Even if Szczerba is the technically the number one, both will see significant playing time.
Anything Else
All that playing time Haplea got last year will be good for him. It's valuable experience that he may not have gotten until maybe another year or two down the line. Short term pain may turn into long term gain, but nothing is certain here.

Garry Gilliam is expected to miss all of 2011 due to the ACL tear he suffered at Iowa last year. If he does miss the whole season, it's a significant loss. Gilliam has a very nice mix of speed, size and athleticism, and should be a very handy weapon to have in the future. Nate Cadogan shouldn't see time at tight end unless #TETrollgaze2k10 repeats itself. J.D. Mason and Michael Yancich are also listed at tight end, but I wouldn't expect them to see much of the field unless something really nutty happens. Let's hope said nutty scenario does not come to pass.