And yes, it was as delicious as it looked.

This week, we borrow from a new friend in the ever-expanding BSD Food Network.  Over at 1FineCookie, Jasmin has been posting one ridiculous recipe after another.  Golden beer cupcakes with beer and bacon frosting? Check.  Chili-cheese potato cups?  Yessir.  Pretzel-wrapped hotdogs with chili cheese sauce?  Boom.  Cholesterol'd.

Something slightly healthier, you ask?  I guess.  Meet me below the jump.

Jasmin recently posted a number of variations for Pretzel Crisp sandwiches involving neuchâtel cheese instead of your typical cream cheese.  Your options are Buffalo and Blue Cheese, New York Everything Bagel (with smoked salmon or lox), Jalapeño and Cheese, and Chocolate Dipped Vanilla Bean and Cinnamon Toast.

Head over to 1FC for the full recipes.  They're all incredibly easy snackables suitable for early morning or mid-afternoon parking lot antics, and end up looking like this: 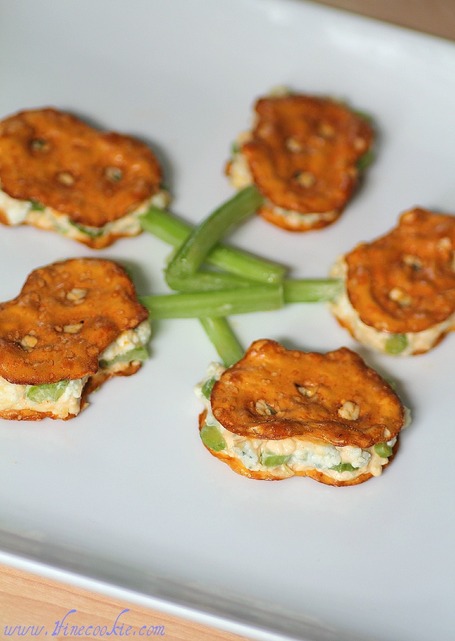 For all of the heroics involved in tailgate edibles -- #neverforget Tailgate Shogun's Deep Fried White Castle -- sometimes we also require heathier snacks* to mix in with the wings, burgers, and fried pierogies on gameday.  Other than the standard veggie trays and fruit salads, what are some of your non-fattening choices for Saturdays in Happy Valley?

* - Or, at least, something that doesn't tempt cardiac arrest upon first taste.