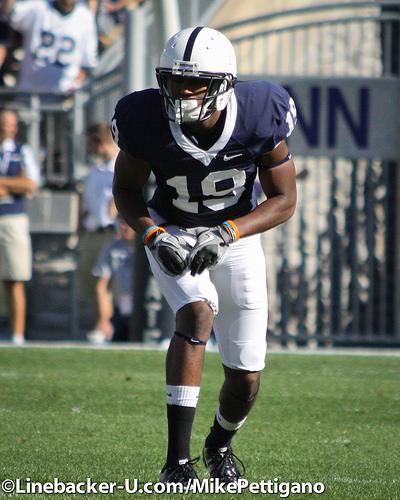 Until now, our preview series has focused on positions that are dominated by one or two players at a time.There are no should not be any two-quarterback plays in the Penn State playbook; Joe Suhey and Michael Zordich won't be on the field at the same time; and no more than two running backs or tight ends will ever be in on the same play.

Wide receiver is different. It is a position that is filled with no less than ten scholarship players, at least seven of which should see playing time, and certain offensive sets utilize up to four of them at a time (five if PSU played in the WAC). This preview doesn't take into account the tight end position that Peter covered, which has at least five more receivers. Needless to say, the options for Rob Bolden or Matt McGloin are numerous.

By the end of 2010, Justin Brown had jumped Graham Zug as the second wideout on the team, opposite Derek "Pretty Boy" Moye. With only Zug and Brett Brackett leaving the receiving corps from 2010, the unit should be one of the strengths for the 2011 offense, provided the offensive line can give whomever is under center enough time to get the ball to the receivers. 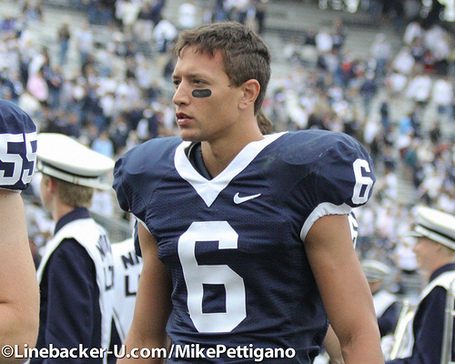 All three starters returning is never a bad thing. These guys have all spent plenty of time with each other and, more importantly, with each of the quarterbacks fighting for the starting spot. They know the playbook, know their routes, and can catch a mean fade against Northwestern.

Moye is the elder statesman of the group, a redshirt senior that has his sights set on 1000 yards this season. He's also Rittenberg's No. 2 receiver in the Big Ten, and those goals appear within reach.

Brown has the most promise of the group, coming to Penn State as the ninth best WR in the country, but had some issues holding on to the football at the end of 2010. A true junior, expect to see his numbers rise quite significantly from 2010.

In the slot, Smith is blessed with incredible speed, but a small, slender frame (5'7", 157 lbs. per GoPSU, and you can see his height comparison to the 6'5" Moye in this video where Big Red peppers the wideouts with JUGS balls). He also has a knack for seemingly outrunning his own body, running top-heavy and taking himself down without anyone touching him. His hold on a starting spot is the most tenuous of the group, but he should be the starter on opening day. 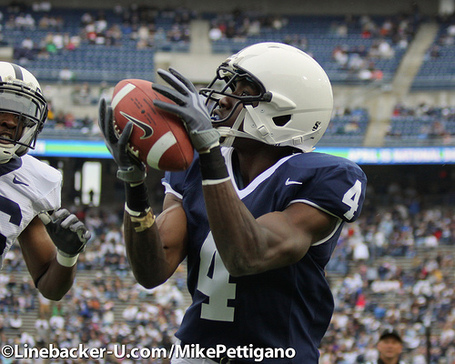 The only other receivers to tally a reception in 2010 (Chaz Powell, now and again of the defensive backfield, also grabbed a couple), Kersey and Moseby-Felder should be the second and third receivers used to spell the starters in 2011. Expectations are high for all three of these players including the true freshman Belton, a former Pitt commit that opted for the Nittany Lions in the wake of the Mike Haywood debacle.

Kersey and Moseby-Felder were members of the vaunted Class of 2009 along with Justin Brown, but various issues have held them back.

Kersey redshirted in 2009, and saw limited playing time last year because of the deep roster of receivers. He threatened (or was rumored to have threatened) a transfer in the middle of the season, but came back and is on the cusp of great things. If things don't work out in the slot for Devon Smith (or Curtis Drake), Kersey is another player to keep an eye for that position.

Moseby-Felder has also been stuck on the depth chart for a couple of years, but many of his teammates have nothing but good things to say about the Maryland-born receiver.

Belton, a true freshman from New Jersey, is already wowing teammates and onlookers in fall practice, and should push Devon Smith early for the starting slot position. Belton is also the type of quick-speedy that you want to see back on kick/punt returns, but that's a story for a different edition of this series.

If you couldn't tell from the stat lines, these guys lack some experience, but it's not their fault for the most part. Kuntz and Drake have battled injuries (and noted doghouses in Drake's case), while Zanellato and Robinson are true freshmen.

Kuntz redshirted his freshman year, but two injuries last year forced him to the sidelines. A knee injury kept him out of the early part of the season, and then a broken collarbone sidelined him again later in the year. The Pennsylvania native will look to make some moves, but with a crowded depth chart ahead of him, seeing meaningful playing time will be difficult.

Drake was impressive as a freshman in 2009, performing all manner of roles including rushing (4 for 24), receiver (8 for 98) and all-around team player (he appeared in 11 of 13 games in 2009). A broken leg prior to last season forced a medical redshirt, and brought a nagging injury to the forefront of a promising career. Some offseason legal trouble and continuing medical problems have Drake buried on the depth chart, but don't be surprised to see him soon.

Zanellato and Robinson are likely redshirt candidates, if for no other reason than to create some separation from the logjam ahead of them. With Penn State likely to only take two wide receivers in the current recruiting class, these two should have a leg up in a couple of years. Definitely keep an eye on Zanellato, who some say has incredible hands and is quite adept at his route running.