Success With Hyperlinking Gets A Bloody Move On

Share All sharing options for: Success With Hyperlinking Gets A Bloody Move On

A Lonely Camaro Mopes In A Dark Garage.  There are many iconic mustaches throughout sport, but none more famous than the stoic lip caterpillar of Dave WannstedNOOOOOOOOOOOOOOO.

Catch Them At Next Year's Just North By Just Northwestern.  Because it was only a matter of time before Iowa's coaching staff put together a K-TEL album of late 70's meth-funk.

A Dream 100 Years In The Making.  How long have some people wanted hockey as a varsity sport at Penn State?  Oh, only since 1911.  Thank You Terry digs this plea out of an ancient Collegian (head over there for the whole thing): 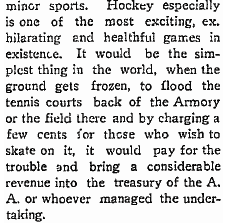 Best Item On The 99-Cent Menu? Love. Adversity.  It's a fact of life, but we're all judged on how we deal with it.  So when a 24 year old Taco Bell employee became tired of getting turned down for dates by his 18 year old co-worker, he did what any romantic would -- handcuffed himself to her.