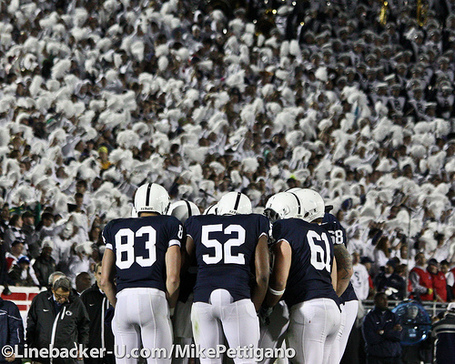 In some ways, Penn State's offensive line woes have been greatly exaggerated. Sure, the Nittany Lions have struggled with some teams, particularly when facing the dominant defensive lines of out-of-conference power Alabama, or Big Ten rivals Ohio State and Iowa. But this is the same program that has put together a running attack that has featured six straight thousand-yard rushers, including Tony Hunt and Rodney Kinlaw, two players who spent virtually no time on any NFL roster. Even the woes of the Dark Years can be traced back to the Great Skill Position Absence of 2003 and 2004[1] rather than the line that was protecting Zack Mills and Michael Robinson.

Still, Penn State's offensive line has been much maligned by fans and pundits alike over the past few years, and last season didn't help the team's cause. Despite the presence of All-American guard and future second round draft pick Stefen Wisniewski, Penn State struggled to establish the run and in a few games looked downright incompetent.

The 2011 Nittany Lions lose Wisniewski and starting center Doug Klopacz, but hope springs eternal. The crew returns 3 starters from last year's line, which means that the starters have already built relationships on the field with each other. And while they struggled to play smash mouth football last year, they kept both Rob Bolden and Matt McGloin clean, giving up only 12 sacks all season. In short, there is plenty of work to be done, but a few positives to build on as well.

Tackle is probably the strongest position on this year's offensive line. Barham and Okoli both return a tremendous amount of experience. The two fifth year seniors should prove to be solid bookends for an offensive line that is looking to develop as a cohesive unit.

Quinn Barham had played every position on the line during his Penn State career before settling at left tackle last year. Barham is not and has never been a road grader. He's a finesse tackle who will provide solid protection for his quarterback unless he's physically outclassed by a guy like Iowa's Adrian Clayborn. Barham is the only returning player to have started all 13 games last year.

Chima Okoli's career has taken a different path. Okoli spent his first three years at defensive tackle, seeing snaps in 15 games during his redshirt freshman and sophomore seasons. Depth issues forced a position change during spring practice last year and he secured his spot as a primary backup behind starting senior tackle and All-Big Ten candidate Lou Eliades. When Eliades went down with a knee injury, Okoli started eight of the last nine games and performed admirably. Okoli was solid, if unspectacular. He has the size and natural ability to be an excellent tackle. Assuming he's continued to refine his technique, Okoli should continue to impress.

Mike Farrell is the only reserve with any meaningful experience. He was Barham's backup last year and made an emergency start at right tackle against Indiana after Okoli went down briefly with an injury. Farrell played surprisingly well in his limited time on the field and should continue to improve while providing quality depth for both senior starters. Adam Gress has seen some snaps, but not nearly enough for anyone without access to Holuba Hall to form an opinion. Various reports have given Gress positive practice reviews despite being lightly recruited out of high school.

The same cannot be said for Eric Shrive, who was very highly touted coming out of West Scranton High School. Shrive was rated as highly as the number two tackle prospect in the country and was expected to contribute early. Instead, he was passed last offseason by both Okoli (a defensive lineman) and Farrell, and apparently was even with Gress. Shrive is still young, has a tremendous amount of natural talent, and the depth chart remains friendly. He has to seize the moment.

If he doesn't, it's possible that young Shrive will be passed by one of the three freshmen linemen. Smith, Nowicki, and Mangiro were all well regarded as high school players and come to Penn State with high expectations. Considering the open depth chart, it's possible that at least one of them could challenge for time. Still, Okoli and Barham are firmly entrenched here and, barring injury, will be your starters for thirteen games.

With the graduation of Stefen Wisniewski, guard is the position with the most question marks on the offensive line.

Johnnie Troutman is an enigma. He has the size and skill of an NFL lineman but continuously finds himself in the famous Paterno doghouse. Troutman needs to focus. He's a multi-year contributor who always seems to be fighting for his starting spot because of off the field problems or trouble making weight. In spite of all that, he's very agile for his size and is the best run blocker on the team. He's made 19 career starts, the most of any lineman on the team. If anyone will make room for Silas Redd, Brandon Beachum, and Stephfon Green this year, it's Troutman. 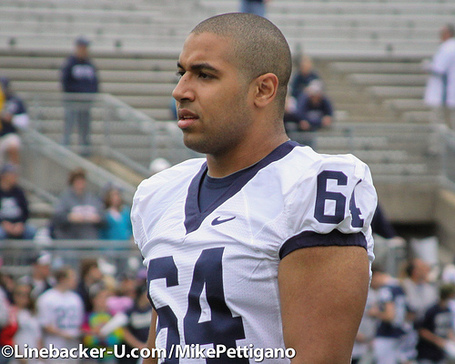 John Urschel has the unenviable task of replacing one of the most decorated offensive linemen in Penn State history, but he's already off to a great start. Like his predecessor at right guard, Urschel is a Dean's List student who carries a 4.0 GPA in mathematics. Like Mike Farrell, Urschel also played a mostly reserve role except for the Indiana game, where he played well for 66 snaps. Urschel is a classic Penn State guard. He's agile enough to pull on plays that call for it, and strong enough to throw the shot put 57 feet in high school.

DeOn'tae Pannell is frustrating. A guy who was once the heir apparent to bad, bad, Levi Brown[2] ended up changing positions and fading into the bench. Pannell is a capable reserve and will play minutes should either Troutman or Urschel need to be spelled. Still, you can't help but feel that more was possible.

The rest of the reserves are in a similar position to those at tackle. Entirely unproven with no meaningful experience to speak of. As Joe Paterno told the media in April, "We don't have any depth there."

This is the second go-round for Matt Stankiewitch as a starter. Stankiewitch started the first two games of his active Penn State career in 2009 at left guard. As a redshirt freshman, Stankiewitch showed promise but was overpowered by stronger and more experienced defensive lines. Last year, Stankiewitch played in 6 games before being held out due to mono for the rest of the year. Stankiewitch has played conference games and has had two years to increase his strength in order to compete with the players at this level. He has a great opportunity to be a two-year starter for the Nittany Lions if he has put in the work.

Ty Howle was Penn State's snapper on extra points and field goals during 2010. Howle was a highly recruited player out of high school in North Carolina and, like Urschel, has one of the top GPA's on the roster. He'll be a quality reserve for the 2011 season and all indications are that he will play well when called upon.

Miles Dieffenbach has often been referred to as the center of the future. As a high school player, Dieffenbach was considered the top center in the country by ESPN and no lower than 4th by any other service. Dieffenbach was originally considered a Pitt lean - his father has been the tennis coach there since 1981. Instead, Dieffenbach came to Happy Valley. He redshirted last year, but all reports have been very complimentary. Like all young players, Dieffenbach must work on his strength and technique. Still, it wouldn't be a surprise to see Dieffenbach end up atop the depth chart at some point this year.

[2] The baddest man in the whole damn town.