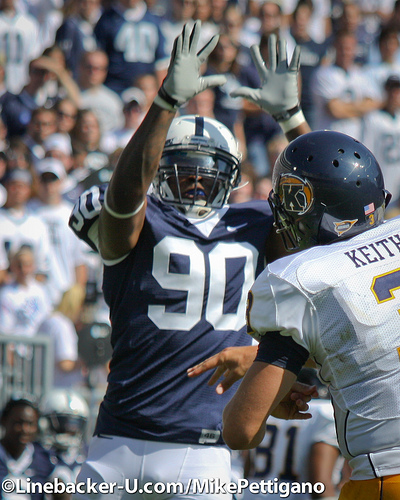 2010 was not exactly a banner year for the Penn State pass rush. The team notched only 17 sacks last year, which was good for 96th in the FBS, tied with Akron, Rutgers, Bowling Green and Georgia Tech. Not exactly high company. The top two sack...ers (?) from last year were Devon Still (defensive tackle) and Pete Massaro (will miss 2011 with his second torn ACL), and they only had 4 and 3.5 sacks, respectively. Jack Crawford and Eric Latimore both missed significant time with injuries, and are looking for bounce back seasons. Behind Crawford and Latimore, a lot of inexperienced players are going to be getting significant reps in the defensive end rotation. Why? Because there's no other choice.

It should be said that just looking at sacks is not a complete or accurate way to measure the productivity of a team's pass rush. However, even when you take into account tackles for a loss, Penn State's defensive ends didn't look all that much better. If you keep digging deeper, you start running into stats like QB hurries, which are hard to measure consistently and objectively. And so it often comes back to the dreaded eye test. I can tell you this: I watched the replay of the 2010 Northwestern game last night, and Penn State got absolutely no pressure from their defensive ends. If you can't get pressure against Northwestern, what do you expect will happen against Ohio State or Alabama?

With that, here's what to expect out of Penn State's 2011 crop of defensive ends. 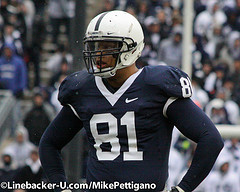 It should be noted that Crawford and Latimore will be starters pretty much in name only, as the defensive line rotation will cycle in several other players with regularity. However, the experience factor should give these two the edge for the starting jobs, assuming that they're both healthy. Crawford missed three games last year with a foot injury, and Latimore missed the rest of the season after hurting his wrist against Illinois. Losing Pete Massaro in spring practice to a knee injury was a huge loss for this unit, as he was not only the most productive player at the position last year, but he's also one of those invaluable all-effort, high motor guys. I'm not saying that Crawford and Latimore won't be productive this year, as they both have a lot of talent, but they will need to dramatically improve on their stats from last season in order to make a significant impact.

Stanley may only be a sophomore, but he's played in 23 games since arriving in State College. Hopefully that experience will allow this to be a breakthrough season for him now that he's not buried several layers down on the depth chart. Also, he's a starter in NCAA 2012, so that's got to count for something, right? Olaniyan and Baublitz redshirted last year and should jump into the rotation immediately. How much playing time they get will obviously vary depending on their performance, but the coaching staff can't afford to bury them if they don't play well right away. There's just not enough depth at the position right now. For what it's worth, Baublitz hauled in two sacks this year's abbreviated Blue-White game.

Irvin's been mostly a special teams guy so far, so his impact is likely to be minimal this year. As for the incoming freshmen, the situation will depend on A) who redshirts, and B) injuries. If we have two players in the DE rotation miss extended time like Crawford and Latimore did in 2010, then a freshman may be pressed into duty. Hopefully it doesn't come to that, and these kids have time to develop and mature before they hit the field, but as we all know by now, things don't always go to plan.