For Bolden, McGloin, and Teammates, No Lingering Issues

Share All sharing options for: For Bolden, McGloin, and Teammates, No Lingering Issues 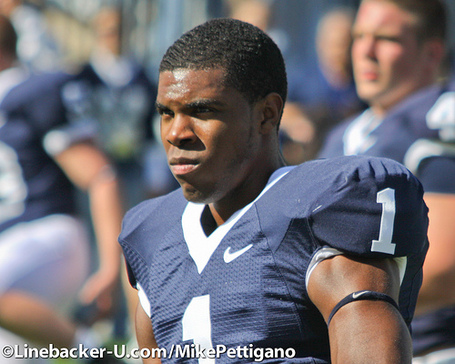 Standing in a throng of reporters yesterday afternoon, Rob Bolden calmly fielded questions regarding his status in the ongoing quarterback race between himself and Matt McGloin. It wasn't the first time Bolden had answered these sorts of questions, but one of the first times the media had the opportunity to talk to him since Bolden's attempted transfer in the spring.

Rob's counterpart, the redheaded fiery kid from Scranton answered the same sorts of questions some 50 yards away, taking the occasional glance over the crowd as if to look for some sort of respite from the onslaught. Undoubtly the literal space need to interview both quarterbacks required them to be apart, but the divide was still evident. Two players, one starting position, and a complicated history. To assume that chemistry issues would sprout from such tension would not be unreasonable. Add in the fact Bolden attempted to transfer out of Penn State and it would only seem natural if his teammates were hesitant to accept him as the potential leader of the squad. According to Rob Bolden, Matt McGloin, and their teammates, however, this isn't the case.

"Matt and I are fine, we joke about stuff, we hang out together, everything is cool," Bolden said. "I even joke around with Joe. I'll show up in his office and crack a joke. It's all good." From starter, to injured, to benched, to attempted transfer, Bolden has seen it all in his one short year at Penn State. Even so, his teammates stress that it isn't an issue.

"We were happy to have him back," Silas Redd ephasized to a group of reporters. "He's a good kid, both Matt and Rob bring different things to the table and are both good capable quarterbacks. We're a family here. Everyone still hangs out and jokes around. Nothing has changed"

For Bolden that may have been his biggest hurdle. By earning his teammates respect and trust, he has given himself a huge advantage in the quarterback race. Assuming that his offseason progression has helped him iron out some kinks in his game, he should be well on his way towards the starting job. If his teammates remarks are at all accurate, Bolden's temporary departure from the football program is a thing of the past to them.

As far as Matt McGloin, he's happy too. "It doesn't matter who ends up starting, they just have to play well. Be it myself or Rob, we just need to win." When asked if he has any hard feelings towards Bolden, McGloin responded, "None at all, it's a friendly competitive race."