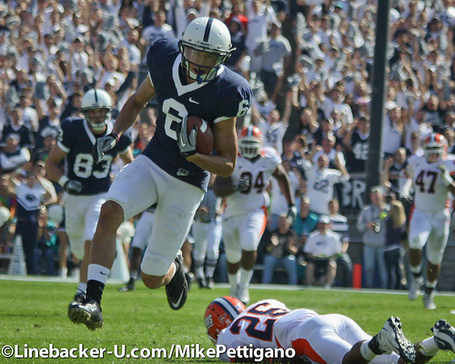 With all of the news surrounding media day, it can often be difficult to sort out the news from the commentary and opinion pieces. So to clear things up a little bit we're going to give it to you straight facts, as best we can describe them and we'll move on from there.

- Stephfon Green isn't on the roster

Citing off the field issues Joe Paterno said it was "unlikely" that Green would see the practice field again. According to Silas Redd, Green hadn't reported to camp during the summer but not by choice. While no details were given as to Green's troubles it seems as though this really is the end of Green's time on the squad. There is a slight chance however that he could make it back on the roster when it expands to 105 though. Slight.

-Anthony Fera back in the doghouse

This was sort of passed over by almost everyone at media day, but Anthony Fera has landed himself in the doghouse again. While this time it isn't as serious as an underage arrest, he was not present at practice but is expected to return some time next week. None of these issues are seen as something that would keep him from his starting position.

-We forgot about John Cabot

Sort of a off topic mention but he's a quarterback and on the official roster. We'll never mention his name again I hope (Sorry John) but he was practicing with the team.

Even though Jones isn't on a scholarship for academic reasons, he's still practicing with the team. Looks as big and as strong as he always has.

-Joe is coaching from the sidelines

While Joe would always be the last guy to say otherwise he seems pretty determined to coach from the sidelines at the start of the season. To his credit he sounded sharp, and all things considered he looked pretty good as well.

Having added about 5 pounds to his frame, which I would guess is all muscle, Moye looks massive. Right now he is at 6'5 215 and looks like he could have a breakout year. I use breakout very lightly as we all know how good he is. He just might have one of those years where somebody just goes wild. Also ran all of the drills and warmups at full speed. Has a shot at First Team All-Big Ten if he gets the ball thrown his way enough.

Notice large. Coming in at 5'10 206, Belton is the same height as Devon Smith, but 50 pounds heavier. As McQueary put it, "Belton you have great hands but that's all you've got going for you. You're fat." He does however have great hands. If he can figure out how to move himself around the field he'll be a good player.

Drake was at practice yesterday taking part in non-contact drills. Joe mentioned that he is in much better shape but the doctors are still not ready to let him play. He's up in the air as to when he'll be back. The projected return time is October at this point.

-Crawford and Latimore are back

After being out for a good chunk (or all of) last season, Crawford and Latimore will be both be back at 100% to start out the season. And as always Crawford looks scary.

Larry Johnson Sr is pretty high on Jones' abilities and skills so look for him to make a difference in more than one position. Overall Johnson expects to travel with a deep bench on the defensive line. Something we've come to expect, but still need to hear. Johnson's guarded excitement could be the sign of another dominating unit.

-Freshman come in all shapes and sizes