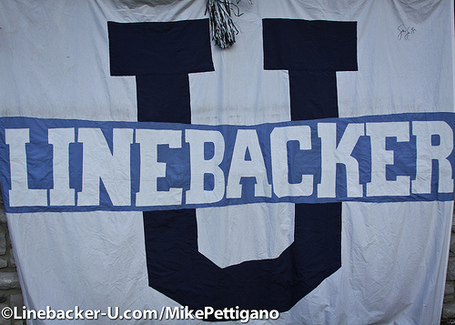 Linebacker U. The most well-known of all the college football nicknames has been earned by one school and one school only: Penn State. But in 2010, you wouldn't have known it from the product on the field. It was a terrible display of inconsistency, timidity, injury and pure lack of talent in the starting lineup. You can expect those years once in a while, but not often at a place like Penn State that prides itself in the very position that failed to play up to snuff last season.

This year, however, it looks already like things will be different. It's tough to live up to the standards set by the past greats to roll through Happy Valley. But that's how greatness is achieved. Not by shying away from adversity, but by rising to the occasion and fighting through the challenges.

Penn State has the talent, the maturity, and the leadership to make the 2011 edition of Linebacker U. once again a special group of Nittany Lions. But whether or not Michael Mauti, Nathan Stupar, Gerald Hodges and the rest can turn their massive potential on the practice field into dynamic play on the playing field remains to be seen.

While the inside linebackers have been every bit important to the legacy of Linebacker U., many of the greatest to come through Penn State have done so by way of the outside linebacker position. That's the spot we're going to cover today, which includes both the "Sam" strongside linebacker, and the "Fritz" weakside linebacker. Tomorrow, Jeff will introduce you to the "Backer" inside linebackers for 2011. Let's continue, below the jump.

For those Penn State fans who may not be up to snuff on their Nittany terminology, here’s the very quick rundown: 1) Penn State calls the strongside linebacker the SAM, simply enough; 2) the middle linebacker is called just the "Backer"; and 3) the most important of all, the weakside linebacker is called the "Fritz," named after the founder of Home Delivery Pizza in State College. Yes, that’s true. So now you’ll know what I’m talking about when you see "Fritz" all over the place.

Penn State calls its strongside linebacker the "Sam" outside LB. This is the strongest, most athletic linebacker. The strong side is the side of the opposing offense that is to the wide side of the field. 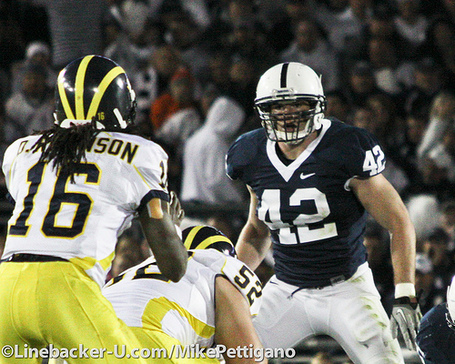 Mauti is on the Butkus and Nagurski watch lists this year. The fourth-year junior tore his ACL following the 2008 season in which he played significant time as a backup. Mauti redshirted 2009, returning for 2010. But the injury bug wouldn't shake off, as Mauti missed two games and was hampered a bit in four others. Had Mauti been able to start all 13 games, he would have easily surpassed 100 tackles last year and likely notched about 5-6 sacks. His leadership on defense during the epic comeback win against Northwestern was just a sample of the kind of talent Mauti brings to the team. It was his best single-game performance, registering 10 solo tackles (11 total), 3 for loss, and a sack.

Despite what would end up being a temporary move to middle linebacker this spring, Mauti returns to the outside for this fall.

Mauti is the unquestioned starter and leader of this year's edition of Linebacker U.

Penn State calls its weakside linebacker the "Fritz" outside LB. 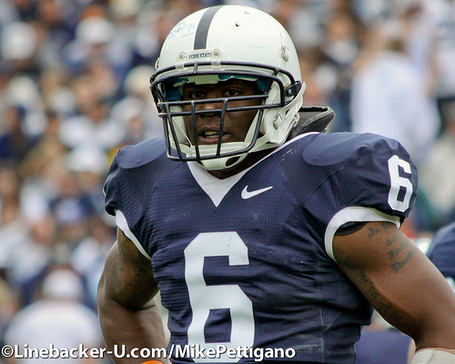 If Gerald Hodges doesn't look like they prototypical Penn State linebacker, I'm not sure we're looking at the same guy. A former safety, Hodges has been on the field since arriving at Penn State in 2009. Last season, a leg injury on the opening kickoff at Alabama sidelined him for several weeks. But this year, he's back 100 percent and ready to terrorize opposing offenses. Hodges is pretty much the lock to start. His history as a safety prospect and playing there part of his freshman season will serve him well in this role on the weak side.

The Reserve Outside Linebackers

#43 Mike Hull redshirted last season, and switched from linebacker to safety. But now he's back at outside linebacker and is rising up the depth chart. Many very smart people are comparing him to Sean Lee and Michael Mauti. He should see a good deal of time this year, considering the coaches were close to playing him in 2010. Hull is really that good.

#54 James Van Fleet is a 5th year junior who, last time we checked, still wasn't on scholarship. Van Fleet is a real great special teamer who works extremely hard for the team. He had some good tackles last year on coverage teams, and scored the game-changing touchdown on a blocked punt against Indiana.

Penn State has been shifting around the linebackers all preseason, but with the media day reports flowing from everywhere, it's very likely we will see the Nittany Lions go back to using the SUDE (stand-up defensive end) for 2011. Penn State successfully used this many times in the past, most recently with Derek Cameron Wake from 2002-2004, Tim Shaw in 2006, and Jerome Hayes from 2007-2008.

Nate Stupar is my educated guess (unless you have one of those fancy premium pay-site memberships, which I can't afford) to be the leading candidate for this role. He has been very good in the past on blitzes from the outside linebacker position, as he was originally expected to be the starting OLB with Mauti in the middle. Stupar is one of the most physically suited linebackers to fill this role, as he has a similar build to Pete Massaro. Freshman linebacker Brad Bars is also in the mix. But he is not likely to play a huge part in this role. I'd expect him to be the backup to Stupar here.

I'd imagine Penn State is seriously experimenting with this move is due to the fact that there is scary-shallow depth at the defensive end position and along the line all together. At the same time, there haven't been this many purely fantastic linebackers in Happy Valley all at the same time in decades. Seriously, there is a full two-deep linebacker corps that could rotate in and out without missing a beat this fall. Why not get as many of them on the field at the same time as possible? This is a smart move by Penn State, in a year when the defensive front needs an infusion of talented depth.