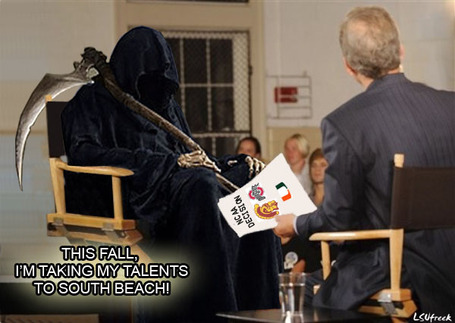 TerreLOLe Pryor. Peezy was declared eligible for the NFL supplemental draft, but will have to sit the first five games of the NFL season for "undermining the eligibility rules of the NFL draft."
Wait. Wait wait wait. What?
The NFL is punishing Pryor for the violations he committed at college (among which was he and his mother receiving money from Ted Sarniak. Stop being so shocked.). I'm not defending Pryor here, but that is bullshit. The NFL has no business punishing Pryor for losing his college eligibility, and if Roger Goodell doesn't suspend every Miami player named in the Yahoo! report, well, then he'll be an even bigger shitheel than we already knew he was.
Lost in all this is that there's a chance these revelations concerning Sarniak will result in additional charges against Ohio State. Try to contain your excitement. STOP IT I CAN HEAR YOU GUYS LAUGHING OKAY I AM TOO HAHAHAHAHAHA-----
Cliff Harris' debut album, now available from Tuff Gong Records. There are times in life when events unfold and they immediately feel like the subject of song. Getting pulled over by the Oregon State Police while driving 118 mph and then openly admitting that he and his passengers "smoked all the weed" is definitely one of those moments.
Hey imagine that, on the field news! BC running back Montel Harris had surgery on his knee and will miss at least the next month. Considering he's the only thing that BC could even consider an offensive threat, this is, how you say, REALLY BAD NEWS for the Eagles. BC starts the season by hosting a very game Northwestern team before taking it on the road to play Central Florida (who may have NCAA issues of their own). Not exactly Murderer's Row, but those games aren't gimmes.
Jerel Worthy is a little bit crazy and I think I like it. The Spartan defensive tackle sat down with Adam Rittenberg, and naturally the conversation lead to his new tattoo.

It was just an idea. We were chilling one day, and I came up with I wanted to get a Spartan tattoo to represent my school, and my dislike for the school down the road. I didn't want it to go down as negative message toward anybody. Just wanted to show the love I had for my school. I told my tattoo artist and he sketched it up, and I enjoyed it.

For those of you who couldn't make the tattoo out in the picture, it's a Spartan warrior standing over a pathetic looking wolverine, ready to poke it full of holes with a sword. But hold on, it gets better.

I had it done in Ann Arbor, at my friend's house. We were all hanging out, relaxing and barbecuing, and we were all getting tattoos. A lot of people came up with their ideas, and that's what I came up with. And there it was.

Yes, that's right: Jerel Worthy got a tattoo demeaning the Michigan Wolverines while in Ann Arbor, at a friend's house in the middle of a barbecue. If the needle wasn't sterilized in a tumbler full of liquor I'm going to be sorely disappointed.