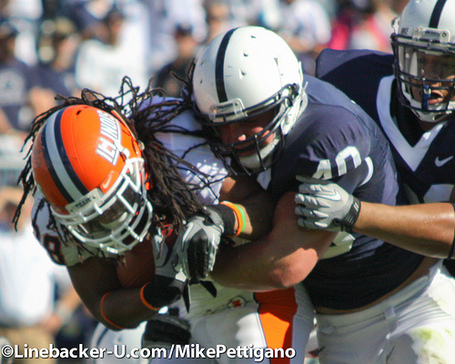 The Penn State middle linebacker, or Backer, is a position of glory. The "defensive quarterback" according to Jerry Sandusky, the man filling this role must be a "powerful athlete with good judgment." With a wealth of talent around the middle linebacker, it'll be tough to find someone more athletic than the rest. But the defensive staff, in some relatively surprising news, has found a couple that have many Penn State fans excited.

The Starter - Glenn Carson (So.)

Carson was recruited in the Class of 2009 out of Manahawkin, NJ, the No. 7 ranked MLB by Scout. Not only was he a great football player in high school, though, he also excelled on the mat:

Carson signed his letter of intent in February 2009, but suffered some serious back injuries that forced a grayshirt, pushing him into the Class of 2010. He saw action in all thirteen games as a freshman, racking up five tackles against Illinois with a Mike Mauti-less defense and three tackles against Florida in the Outback Bowl. He wasn't an all-world linebacker, but he was still a freshman and performed admirably on an injury-depleted team.

This spot was expected to go to Mauti in 2011, but Carson has been impressing the coaches so much that they have kept Mauti on the outside (along with Gerald Hodges) and moved Carson up along side him to create one of the best linebacking crews on paper. Come September, I'm quite certain that "on paper" will be easily dropped from that previous sentence. 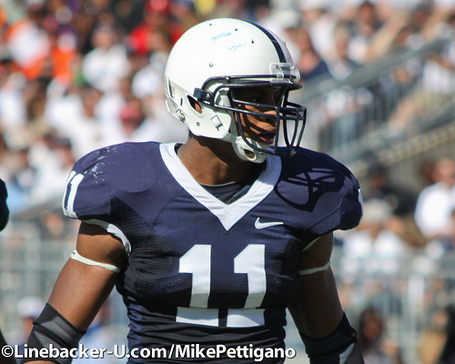 The Backup - Khairi Fortt (So.)

Also a highly rated linebacker coming out of high school, Fortt came to Penn State by way of Stamford, CT in the Class of 2010. Ranked as the No. 11 OLB by Scout, Fortt has become a fan favorite due to his athleticism and fast motor. He saw action in nine games last year including a start against Illinois, tallying 17 tackles and 0.5 TFL.

Like Larry Johnson up front, linebackers coach Ron Vanderlinden likes to keep a steady rotation of linebackers at the ready during the season. With such talent at the position this year, Vandy won't have any problem with quality rotations, and Fortt should see a significant amount of playing time. Fortt could also fill the stand-up defensive end role that is currently being discussed by fans and staff, but will likely be a firm second-team MLB for now.

The Can Someone Please Find Me A Position - Mike Yancich (RSJr.)

A four-star linebacker (No. 4 WLB per Scout) in the Class of 2008, Yancich has occupied the "Well this could be the year for..." status for three years now. A linebacker by nature, Yancich was moved to tight end during the spring due to injuries at the position, but has since moved back. He has struggled to find a role with the linebackers, and has now been passed by almost every linebacker younger than him. There just isn't that much to go on about Yancich, so it's tough to say why he has been having trouble. He saw action in all 13 games in 2010, but mostly on special teams. So maybe he's Penn State's Steve Tasker?

Redshirt Freshman Brad Bars and true freshman Ben Kline are still too early in their careers to be placed somewhere permanent, though Bars has been seeing reps at both DE and LB over the past year. Either way, it's good to know that the future of the Penn State linebacker legacy (which is soon to include Nyeem Wartman and Camren Williams), is safe for quite a long time.