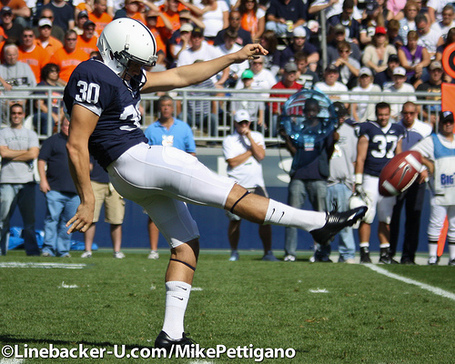 From a pure mental perspective, no position in football is more delicate than that of a kicker or punter. Sure, it may not require the typical grunt work that linemen, linebackers, or skill position players go through. But the amount of pressure on a kicker or punter to be perfect is rivaled only by that of the starting quarterback. It's the reason why after the starting QB, it is the highest recipient of scornful comments in Message Board Land (which reminds me, let's just go ahead and get the Ace Ventura references out of our system: DIE DAN, LACES OUT, THAT'S NOT SNOWFLAKE, FINKLE IS EINHORN, EINHORN IS FINKLE, I HAVE..EXORCIIIISED THE DEMONS).

Penn State's most recently departed kicker, Collin Wagner, was the recipient of such scorn back in 2009 when he proved to be a rather shaky and inconsistent kicker following in the footsteps of four-year starter (and all-time Big Ten scoring leader) Kevin Kelly. Wagner did, however, redeem himself by going a perfect 4-for-4 on field goals in the 2010 Capital One Bowl on a field that was likely used for mud wrestling the night before. That performance set the tone for a solid 2010 season overall which began with Wagner successfully nailing all three of his field goal attempts from 40+ yards out in the season opener against Youngstown State (which were sorely needed while Rob Bolden tried to discover his groove).

Wagner's departure, along with last year's punting/kickoff extraordinaire Anthony Fera being in JoePa's dreaded doghouse, has left gaping holes in the kicking game that are in dire need of major patch-up work. And who will help fill in the holes? Find out, after the jump...

Are you done giggling over the fact that you were the 38,567th person to point out that his last name is one vowel replacement away from becoming one of the seven words you can't say on network television? Good. Not much is known about Ficken at this point, given that he's a true freshman, but with Anthony Fera in JoePa's doghouse (more on this in just a moment) he is by default, the starting placekicker and will likely handle kickoff duties as well for the time being. Taking a good look at his stats from his senior year of high school though, you can see he's got plenty of potential. Here's to hoping that Sam is up for the task and will follow in Kevin Kelly and Craig Fayak's footsteps in becoming PSU's next four-year placekicking star.
Alex Butterworth - Sophomore - Punter 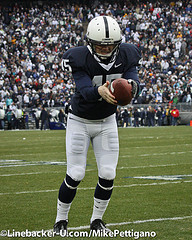 Forced into starting punter duties during the Indiana and Michigan State games last year after Anthony Fera went through emergency appendectomy surgery, Butterworth will get further opportunities this season to improve upon his underwhelming average from 2010. He doesn't have the powerful leg that Fera does, but there is certainly potential for him to become a more accurate punter who can land the ball out of bounds inside an opponent's 10-yard line, a skill that comes in very handy in defensive struggles where field position means everything. Much like Ficken, the jury is still out on this kid.

Would Be Starting If He Weren't In JoePa's Doghouse

You're all aware by now of his latest underage drinking bust (thankfully, no Cruzan Mango Rum was believed to be involved this time around). His absence will be felt mainly on the kickoff team, where his booming leg that made him a YouTube sensation led him to land nearly 40% of his kickoffs into the end zone for touchbacks. He also was reportedly a front-runner for the starting job as placekicker in addition to kickoff/punting duties. This would've made him one of the rare PSU kicking specialists to pull such a trifecta. As it stands right now though, Fera will likely be held out of the Indiana State and Alabama games. Unless Ficken or Butterworth can step up in the interim, Fera's loss will certainly be felt against Alabama.

If This Had Been an Actual Emergency, The Sound You Just Heard Would Have Been Followed by This Guy Handling Kicking Duties

The title is self-explanatory: Unless both Butterworth and Ficken suffer medical/legal/personal issues of their own that forces them to miss the first two games of the season, the only time you'll hear this kid's name called is when he makes a garbage-time reception or if he's portraying an opposing team's best athlete in practice. Nonetheless, we're giving Evan his due recognition for playing a critical role that allowed the defense to contain Denard Robinson on that wonderful night last October. Best of luck to you, kid.