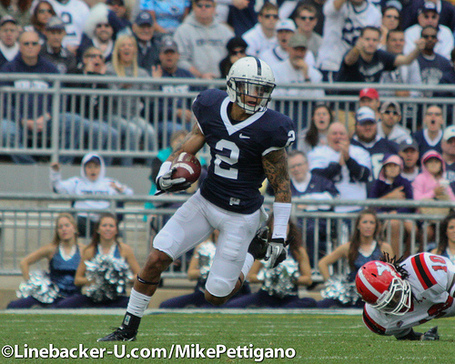 To give these a little more context, let's look at some other points in the special teams continuum:

The Van Fleet TD, naturally, was the scoop and score after a blocked punt against Indiana. In terms of a PSU player fielding a punt and bringing back for a touchdown, you have to go back to Derrick Williams at Wisconsin in 2008. 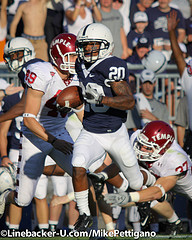 Based on the numbers, Astorino and Brown should not be returning kicks in any capacity, with the only logical exception being when the opposing team is pooching. Otherwise, no. Astorino has been more of Designated Fair Catcher, to his credit. Brown's numbers put him in Notre Dame territory.
Catching a punt is such a perilous, mistake-prone endeavor that even the most sure-handed Penn State players (think Zug and Astorino) can get an acute case of the dropsies. Punters under duress, such as being backed up into their own end zones, are just as likely to launch a line drive scud as they are while standing at their own 30. Why not put someone back there who can make the catch and make some tacklers miss?
Solution: aim a Juggs gun skyward at a 75 degree angle and force Devon Smith (also, Shawney Kersey, Alex Kenney, and Bill Belton) to catch faux-punts for an hour per practice.

We can safely assume that Silas Redd won't be an option for kickoff returns. Green is obviously gone. Powell is an interesting option -- he's clearly the best of the experienced returners, but he's also a starting cornerback. That leaves Moo-Moo again, to give us hopes of having our own little Trindon Holliday. Should be interesting to see which pairings the coaches come up with. Alex Kenney, perhaps?

Usually a pretty good area for Penn State. The 2010 touchdown was a hilariously blocked punt in the Outback Bowl. The 2009 touchdown, of course, was Adrian Clayborn. Let's not discuss those, other than to say they weren't much about actual punt coverage, though the 15.4 average in 2009 indicates more at issue than one blocked and scooped punt. Still, for unblocked punts, no return touchdowns in the past five years says Penn State is doing something right.

Hey, 2009 isn't the suckiest this time! Certainly, Anthony Fera's leg strength contributed to better performance, although a one yard difference in either direction equals a jump/drop of about 20 spots in the overall rankings. As you'd probably expect, the middle of the curve is packed.

Again, very tightly grouped in the middle. And just for the hell of it:

No real beef here other than arrrrrrgh2009.

Chart? (I've always wanted to do this.) Chart. 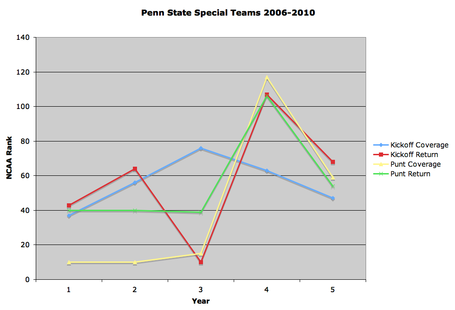 Truth is, for as much as we read GRRRRR WHY DON'T WE HAVE A SPECIAL TEAMS COACH, JOE during the season, Penn State's special teams are generally pretty good. I'll continue to argue that the coaching staff is missing an opportunity with its punt returner choices, which have been risk-averse beyond belief.