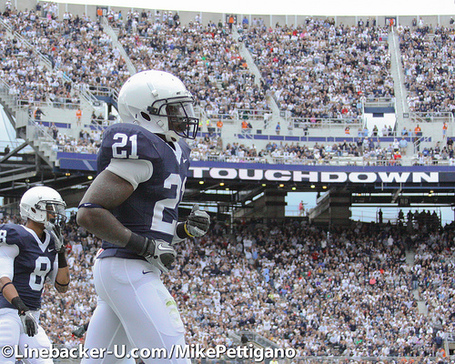 [Yes, nobody reads the fanposts.]

Overnight, banished Penn State senior running back Stephfon Green (with an assist from Derek Moye) announced that he's been permitted to return to the PSU football team.  Green was suspended for the charitably-vague offense of "having some problems with Joe Paterno", which really could be code for anything from criticizing Sue Paterno's lasagna to...what Green supposedly/allegedly was repeatedly doing against the wishes and instructions of the coaching staff.

Regardless, he appears to be back, a decision that came at the urging of Green's teammates:

The decision to leave Green off the roster was not a popular one with teammates, several of whom went to bat for him with Paterno. The team also submitted a petition to have him reinstated, led by his senior classmates. Despite his declining numbers, the Bronx native has remained one of the Nittany Lions' most outspoken leaders and one of the more popular figures on the team.

Consider me officially torn on the issue.  Green is obviously well-liked and respected by his teammates, not to mention the vast majority of Penn State fans.  He's never had any legal trouble.  Even when he's not in the game, he's really enthusiastic on the sidelines and loves to see his teammates succeed.  He seems like a good guy and yes, he's a modestly productive player when he's in the game.

At the same time, the decision to bring Green back into the fold is not exactly a display of authority by the coaching staff, which has a history of cleaning out players' lockers when they get in trouble, only to reinstate them a few days or weeks later.  This was a constant feature of the defensive line suspensions and disciplinary shenanigans a few years ago.  However, allowing Green to return gives him one last another chance to contribute to a program in which he's been a mostly-good citizen for four years.  Sean Fitz reported that Green's return will also carry a "multiple game suspension".  It'll be interesting to see when he actually sets foot on the field again, but here's hoping he can fly straight.