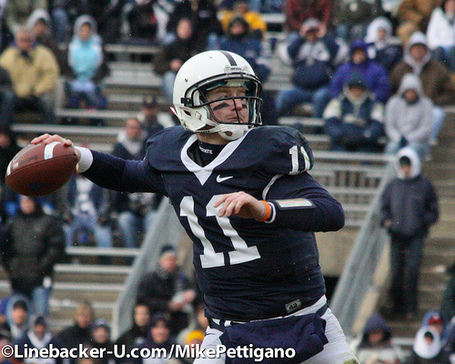 Penn State released its first official depth chart of the season a few minutes ago. There's no point in just running down what they've released, or simply pointing out what's different. I'll try to add my two cents to it all, for you all. I mean, really, that's why you come here every hour, right?

Notes on the offense... (below the fold)

Quarterback. Obviously, we all kind of knew it would be the "OR" situation here. It was reported last week that the two would split time taking snaps against Indiana State. This just validates it. Personally (and I'm sure you'll disagree), I don't mind the split-time approach--for week one. Any more than this one week and it's not a good plan. We'll see.

Receiver. It's a bit surprising to see Shawney Kersey carve out a spot for himself. I'm pleased with the prospect of him seeing more time. Kersey has really good physical attributes. We'll finally get to see them in action more this season.

Offensive Line. DeOn'tae Pannell finally did it... again... for now. Pannell has grabbed the starting right guard spot away from Johnnie Troutman. You'll remember they swapped playing time there last season, with Troutman eventually taking the job. But this just illustrates a disappointing trend with Troutman of him not maintaining the effort (or whatever it is) to keep the job. John Urschel was projected to have the left guard job, and that's what happened. Good for him.

Notes on the defense...

Defensive Tackle. Notice Anthony Alosi and Luke Graham now in the depth chart on defense? These guys were on the O-line not that long ago. This is either a good sign (that they are pretty good on D) or a bad sign (the depth is just that horrid). My guess is the latter. But the overall two-deep defensive line is shaping up to be very, very good this year. Let's just hope PSU doesn't even need the third string.

Linebacker. Nate Stupar is stuck behind Michael Mauti, but I'm sure Penn State will find a way to get him on the field, whether it's the SUDE or running a 4-4 sometimes. I don't know. But he's too good to keep on the sideline.

Corner. Stephon Morris is going to have to earn his way back to the starting job. But that's a tall feat, considering we've heard nothing but positive things about Chaz Powell's performance this off-season. Mike Wallace is D'Anton Lynn's primary back up right now, but if Derrick Thomas can straighten up and fly right, he'll be on the field.

Notes on the Special Teams...

Kicker. Just remember, Scott Fitzkee was the punter for Penn State in the late 70s... oh, hell, that doesn't make anything better. Unless Evan Lewis is some sort of diamond in the rough we didn't know about till now, the kicker situation is scary. Tony Mancuso of GoPSU wrote that Sam Ficken will see time, but he's still not listed officially.

Returners. Nice to see Devon Smith in on both return units. But it would have been better if he was the primary on both.