FOOTBALL AT LAST: A National Week One Preview

Share All sharing options for: FOOTBALL AT LAST: A National Week One Preview 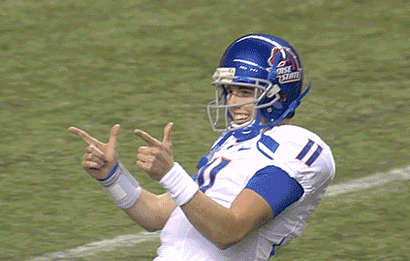 Yep. This is a star quarterback. A bit depressing, no?

Every week I'll be taking a stroll through the top 25 and highlighting some of the more interesting games. Since this is college football and it's the first week of the season, there are...precious few of those. I don't like it, but it's the nature of the beast. That aside, here are some games to keep your eye on this weekend (aside from Penn State's impending demolition of Indiana State) that will help shape the national picture. Kyle will be along tomorrow to take care of the Big Ten slate.

If any of the following ranked teams lose, it can and will be classified as "a complete and total disaster."

Not much analysis is needed here. Most of these games should be over by the second quarter.

The ranked teams in these matchups should win, but underestimating their opponents could turn out to be a fatal error.

I think this game probably should go in the first section, but I just wanted to make note of how dangerous Tulsa can be. The Golden Hurricane may have lost their head coach to Pitt, but they still have a dynamic offense that can drop points on you in a hurry. The Sooners will be depleted at linebacker, so for Tulsa to have any chance to win they'll have to exploit any short and intermediate route covering deficiencies Oklahoma may have. Again, I highly doubt Tulsa comes anywhere close to Oklahoma here, but if the Sooners don't have their head on straight this game could be close for a lot longer than many people would think.

A couple things here. Will Texas A&M be affected by the conference realignment circus that's been surrounding them for the past month or so? I tend to doubt it, but stranger things have happened. Also, SMU does not suck and can score a lot of points. The A&M defense lost their best defender in Von Miller, but should still be up to the task of slowing down the Mustang's passing attack. An upset is unlikely, but once again: Stranger things have happened. Also: #RIP5DH

The Pirates have one of the top passing offenses in all of college football, and can score points in bunches. If this year's South Carolina team really is different, they will go out and put their boot on ECU's neck in the first quarter. If not, then the Gamecocks will let them hang around and potentially blow it. For an accurate barometer of South Carolina's state of uneasiness, make sure to check Steve Spurrier's visor positioning.

I always get nervous when a program loses the centerpiece of its offense, and that's definitely what Andy Dalton was for TCU. The Horned Frogs still have a ton of talent on defense, but I'd expect a step back production-wise for the offense. Baylor still has Robert Griffin III at quarterback, who alone is enough to scare the pants off a lot of teams. I expect this game to be lower scoring and closer than many are predicting.

RETURN TO GLORY, RIGHT GUYS?! Notre Dame has talent, but we haven't seen them put it together yet. The Irish finally have good pass rushers, but those guys are all freshmen. Most people are only talking about Notre Dame, but South Florida is a talented team too. If the mercurial (read: inconsistent) B.J. Daniels can put together a good game, the Bulls have a good chance of spoiling Notre Dame's coronation party.

Like TCU, Mizzou is starting over fresh without their centerpiece quarterback, Blaine Gabbert. They also lost defensive end Aldon Smith to the first round of the NFL draft. This is a team with a lot of turnover at key positions. Miami had a great season last year, but they need to prove they can do it again with a new coach (former Michigan State OC Don Treadwell). The Redhawks also need to prove that last year's 10-4 record wasn't a fluke, as Miami was a putrid 1-11 in 2009. I think they'll give Mizzou a run for their money, but the Tigers should take this.

Good thing both of these teams had quiet offseasons. Oregon returns almost all of their skill position players, but lost almost their entire offensive and defensive line starters from last year. They'll also be without DB Cliff Harris. LSU returns a lot of their bulk from the lines, but just lost their 5th year senior left guard to a knee injury. The Tigers will also be without QB Jordan Jefferson. The thing is though, losing Jefferson may not be the worst thing in the world. He was downright terrible for large portions of last year, and it's completely possible his big performance in the Cotton Bowl was a fluke. There's a lot of bad juju around the LSU program right now, which is why I'm leaning ever so slightly towards Oregon despite their losses in the trenches. This game could go either way, and should be fun to watch.

I'll get this out of the way now: Boise is the better team. It just is. If anyone saw Georgia play during A.J. Green's absence last year, you know just how bad they were to start the year. Well, they need to replace Green again, and I'm not sure there's anyone there to do so. Aaron Murray is a very good quarterback, and Orson Charles could have a breakout year at tight end, but that may not count for much if Isaiah Crowell can't produce at running back. That kind of pressure can't be good for a true freshman, no matter how talented he might be.

Boise has to replace former OC Brian Harsin and their top two wideouts, but they still have Kellen Moore and THE MUSCLE HAMSTER Doug Martin to rely on. I think this game comes down to whether Georgia can put up points on Boise's defense. I'm leaning Broncos, but I think this game will resemble last year's close Boise State - Virginia Tech game.