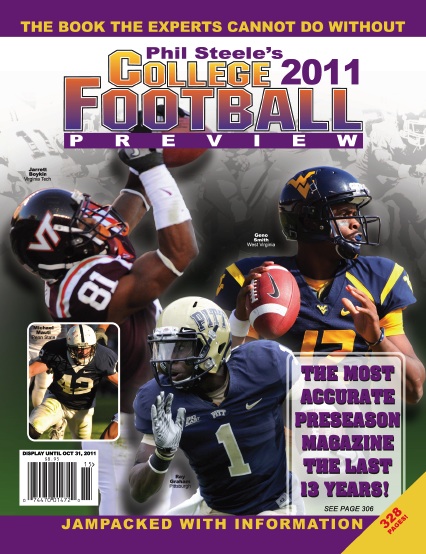 With one day to go before the 2011 college football season officially kicks off, you still have time to study. No, make that you still have time to cram. That's right, we're back in school again and it's time to get the your football nerd on. What better way to do that than with the single most important stack of bound glossy paper in sports?

Phil Steele produces the very best college football preview magazine every year. While other mags include fluff pieces and 12-point fonts, Steele uses stats, facts and a font not small enough to carry all the informational weight, forcing the use of his patented abbreviations, like VHT (very highly touted) or SOD (stopped on downs). Once you can get the hang of the lingo, it's like the world opens up and you're instantaneously an expert on this season. When your friends claim they know who's going to win the SEC East, you can rest comfortably knowing who the real favorite should be.

Today, Phil stops by BSD for a quick chat about Penn State's 2011 prospects, and a little bit of Big Ten stuff, too. I hope you enjoy, and have a few minutes during your lunch break today or tomorrow to pick up his magazine at nearly every grocery store (I used to get mine at Wegmans), or rush order it here. I guarantee it's worth every penny.

BSD: What is the realistic expectation for Penn State football in 2011?

Phil Steele: Realistically if they get their QB situation figured out Penn St could find themselves sitting at...

...9-1 (6-0) when they travel to Ohio St and Wisconsin to end the season. This clearly is a much improved team that should win 9 games this year.

PS: Best Case for the Lions would be starting 9-1 (6-0 in conf) and they are able to win one of those 2 tough conference road games which would probably put them in the first ever Big Ten Title Game at 10-2 (7-1). I do have one set of power ratings that calls for them to beat Alabama and finish 11-1 with the only loss to Ohio St. Worst case would be that they struggle at the QB spot and go maybe 8-4 but all 9 sets of my power ratings have them at least 9-3.

BSD: Much of the fan base has been pointing toward 2012 as THE year for a while now, with 2011 almost considered a warm-up for a big run next season. Is that accurate, or is Penn State primed to put on a show a year "early," this year?

PS: Next year the secondary will take a huge hit and while they will return most of their skill position players they will lose WR Moye and some key OL. As far as this year is concerned I think this is a much more veteran unit than last year and the schedule really sets up nicely for them especially in Big Ten play early if they can get a win over Iowa. I think Penn St will surprise many this year and have an outside shot of being in that first Big Ten Title Game and if that happens many PSU would consider this year as "THE" year.

BSD: Does the Ohio State situation open up the B1G Leaders (East) Division? Or is Wisconsin good enough to make it a one-horse race for itself?

PS: It certainly opens it up a little especially if OSU had been at full strength (no players suspended and Tressel still there) the Bucks might have been the favorite to not only win the Big Ten title but also a national title. I do think the addition of QB Russell Wilson keeps Wisconsin up there but in my opinion it is still a 3-team race and keep in mind the Buckeyes still host Wisconsin and Penn St.

BSD: What's one team in the B1G that the mainstream is ignoring a bit (or at least dismissing as a serious contender) in the 2011 B1G conference race?

PS: Actually I think it is Penn St. The Buckeyes and Badgers have gotten all the press this off-season while it has been pretty quiet in State College with the exception of the injury to Joe Paterno. I do think Penn St’s schedule sets up nicely for them and they could sneak into the Big Ten Title game. In the Legends division even though Iowa is the least exp’d team in the Big Ten, Kirk Ferentz usually thrives in years where expectations are low and they could surprise.

PS: I am really no expert when it comes to conference realignment. I bought in last summer when ESPN was reporting that college football would be going to four 16-team conferences and was burned. This year I have not read too much into it and won’t until the decisions are officially announced so it is hard for me to evaluate the impact that it will have. However it does look like there will be more realignment in the future.

BSD: Do you have a favorite type or style of football--offensive or defensive styles--to watch?

PS: On offense I have always been a fan of the wishbone because it is a great equalizer and allows teams to win with lesser athletes. I also like to observe the quick decisions that the QB has to make on every play. On defense I really do not favor any particular scheme over another but I do like to watch how defenses counteract with the offense. I do have a pet peeve when it comes to defense though and it happens whenever a team hires a new DC. Always, always, always the DC and the HC say that they will be a more aggressive and attacking style of defense and never do I hear that they will be more read and react. If you don’t believe me go back and check any article from a team that has a new DC and I would be surprised to not find the words "attack" and "aggressive" in there. This is just a major pet peeve of mine.