It's 1964, And Penn State Still Needs A Starting Quarterback

Share All sharing options for: It's 1964, And Penn State Still Needs A Starting Quarterback

Today we're continuing our series on the history of Penn State quarterback battles. So far, we've covered 1970 and 1980. Now we're taking you way, way back, to when Joe Paterno was a mere mortal assistant coach under Rip Engle. We present, Penn State's quarterback controversy of 1964... 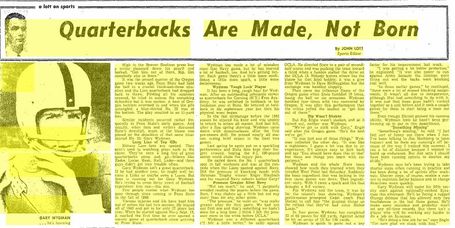 In the grand scheme of things, nothing was particularly special about Penn State's 1964 season. Coming off of a 7-3 record the year before, 1964 would mark the second to last year of Rip Engle's 16 year stint as Penn State's head coach. And even though the Joe Paterno era hadn't even begun, he was already in the thick of some of the program's biggest decisions.

While an assistant under Engle, Paterno had been given the authority to name the starting quarterback, and not unlike today, he picked the less popular player. At the time of summer practice, Paterno had to work with and choose from two candidates. Gary Wydman and Jack White. Gary Wydman, an unimpressive senior quarterback was battling injuries that had kept him off the field most of his career; while Jack White was expected to get the starting nod. For most Nittany Lion fans, this seemed to be an easy choice to make.

Wydman struggled in summer practices and even so Paterno continued to favor him in the race. Much to the dismay of almost everyone involved, when the time finally came Paterno named Wydman the starting quarterback.

As expected, Paterno's selection didn't go over well with fans, alums and the coaching staff. Despite several meetings and arguments to convince Paterno otherwise, Wydman maintained his status as starter. Penn State promptly fell to 1-4. 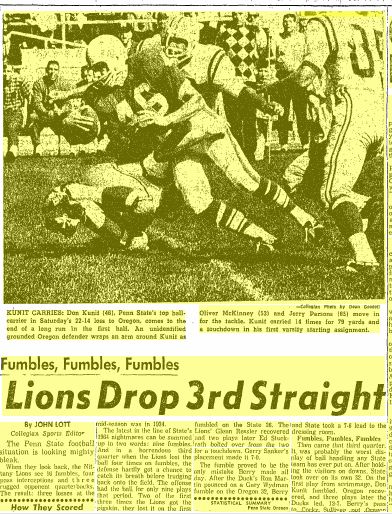 With coaches and fans breathing down Paterno's neck, the tension finally boiled over at a cocktail party where Sunny Engle, Rip Engle's wife told Paterno that maybe it was time to change the quarterback. Frustrated and annoyed Paterno responded "Don't put in your two cents, Sunny. If Rip wants to change quarterbacks, you tell him to come see me himself." To say that Joe threw the hammer down would be an understatement.

As if to foreshadow Paterno's incoming reign of excellence, Wydman was never pulled from his starting spot and Paterno's faith paid off. Penn State went on to win their final 5 games of the season including a win over then #2 Ohio State in Columbus 27-0. The victory not only elevating Paterno's status, but also preventing Ohio State from any chances of a national title bid. It also provided the world with a great headline. 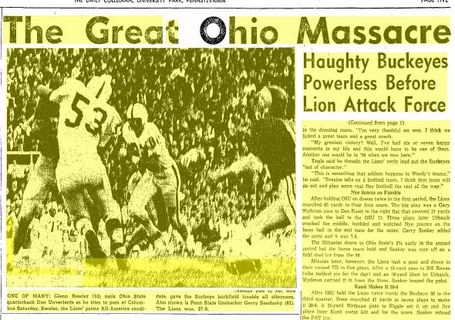 Stay tuned for what will likely be the final edition of this series. What year will it be? Well, you'll just have to wait and find out!