The Most Powerful Penn State Teams Of The Big Ten Era

Share All sharing options for: The Most Powerful Penn State Teams Of The Big Ten Era Since joining the Big Ten in the early 90's, the different Penn State athletic programs have seen varying levels of success and failure. There have been No. 1 ranked championship teams and basement dwelling teams. Few would argue that the women's volleyball program isn't more successful than the men's baseball program. But how do all of the sports compare to each other when their relative successes are examined? Thanks to an idea from a recent post at MGoBlog, we can take a closer look.

Before you take the jump, see if you can name the top five most successful Penn State programs since 1993, with success being simply defined as winning within each sport.

Since 1993, 28 Penn State athletic programs have scored points in the National Association of Collegiate Directors of Athletics Directors' Cup program. Here they are, from historically most successful to least successful. How many did you get correct? (Apologies in advance for the charts; click each to enlarge) 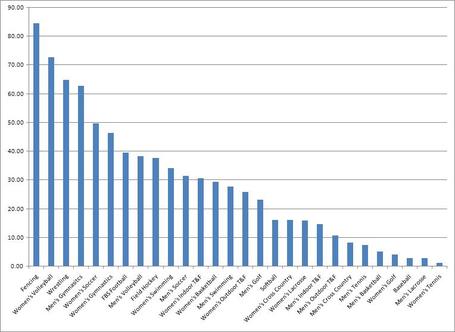 The scale is based on NACDA's 100 point per sport scale; every champion earns 100 points, and then based on the type of postseason, the next 63 (typically) teams earn varying points based on the year's success. The number shown is each sport's average NACDA score since 1993. The asterisks in the graphs below are placed on the 1997-1998 season as NACDA moved to the 100 point scale that year; previously, they had been using a 64 point scale.

Not surprising that fencing, women's volleyball, and wrestling are at the top. All three have won national championships since 1993 (Fencing, included as a women's sport in NACDA scoring, has nine titles; Women's Volleyball has five titles, and wrestling has one title). The other two programs that have won national titles are each with in the top eight (Men's Gymnastics, No. 4; Men's Volleyball, No. 8).

Some of the sports, broken down individually. The top three and their relatively steady success: 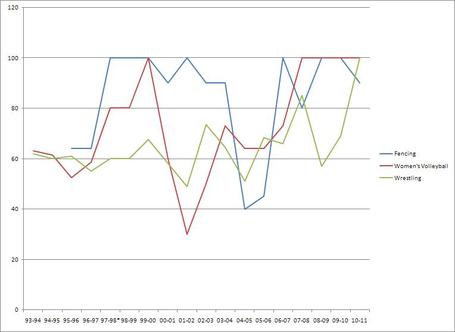 Football at number seven isn't terribly surprising. They've had some serious up and down years in the past two decades. Just look at their chart. 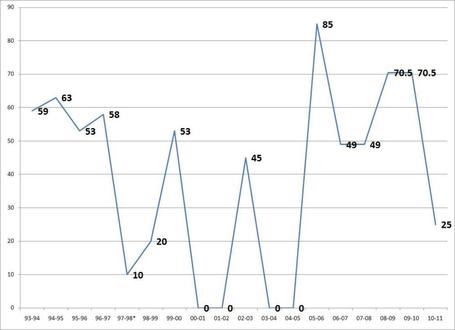 Finally, take a look at the basketball programs, as two of the more popular sports on campus. 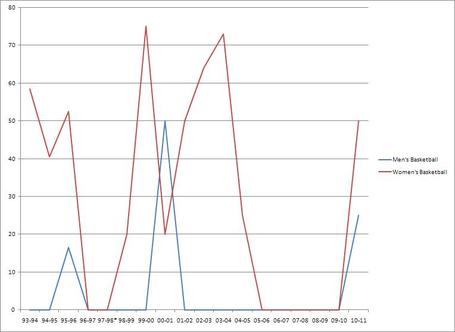 In the 18 years of the Directors' Cup, only one team not named Stanford has won the overall title and claimed bragging rights to most successful athletic department in America. That was in the inaugural season, won by North Carolina (Stanford placed second). Since then, the Cardinal have won 17 straight titles. Penn State final position has averaged 12.44, with a high of 3 in the 1998-1999 season and a low of 24 in the 2001-2002 season. Their chart shows quite a variance, but there's not much you can take from this particular chart, as it takes into account 20 varsity sports per year. 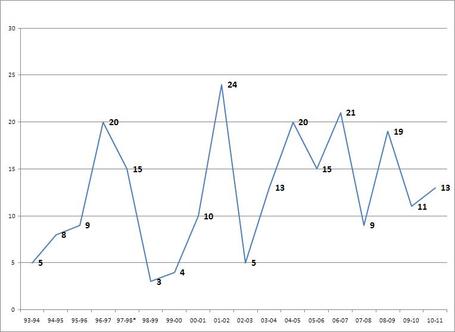 The beginning of the 2011-2012 season is upon us; hopefully Penn State can topple the might Cardinal. With strong showings from the historically dominant teams, there is a chance to make it back into the Top Five for the first time in nearly 10 years.