Share All sharing options for: Three Things Penn State Should Do In 2011: Bolden, Defense, & Blue Band

This is the first of two posts Adam and I will split. While neither of us are on the Penn State football coaching staff, it's just easier to use the "should/shouldn't" wording for these posts. Basically, they're things we as fans would like to see Penn State do or not do for the 2011 football season.


No sense in doing a long intro. Let's just dive in with Three Things Penn State Should Do In 2011. 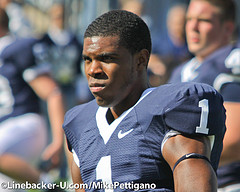 1. Start Rob Bolden. Yes, I'm absolutely diving into the deep end here, right after Ben's fantastic quarterback position preview this morning. Save your mass hysteria for the comment thread. Bolden absolutely got a raw deal following the Minnesota game, and subsequently being yanked against Northwestern. And looking at the games following those analyzed in that post I linked, my point was made even more clearly. Matt McGloin not only played horrible football against Ohio State and Michigan State without getting pulled, but also emerged as the leading cause for Penn State's loss in the Outback Bowl against Florida. Did Bolden get a shot to come in and "save the day," as McGloin was given? Not even a sniff. Bolden very clearly had the better raw talent than McGloin last season, even though he is a full two years "behind" No. 11. With a full off-season of training and a new outlook on his career as a Nittany Lion, starting anyone other than Rob Bolden in 2011 would be the wrong choice.

Bolden has the talent. His arm is a rocket. His accuracy is the best on the team. His mechanics in the pocket are better than anyone we've seen in Blue and White since... well, I can't even remember. But what about all that "moxie" and "swagger" that's apparently so important to a starting quarterback? Just try making your first road start--also happening to be your second start ever--in the wild environment of Bryant-Denny Stadium against the most talented team in college football. Follow that up by traveling to a stadium where every single fan wants to personally spit on your uniform (or toss dead animals at your bench), and see how you do. On top of all that, try to play well with an offense that can't run block, can't make big plays, and can't stay healthy, all the while a your counterpart defense is having a tough time stopping any run game with a pulse.

No. 1 isn't the same quarterback we saw in 2010. This isn't the same offense we saw in the first half of 2010. If Penn State wants to win this season, and in the next three seasons, it should start Rob Bolden.

2. Challenge the Defense. A common knock on Penn State's defense is that they never blitz or play "aggressive" football. Last season, that was an accurate assessment of the situation for sure. But is it a chronic condition in Happy Valley to play corners 8-10 yards off the line of scrimmage, blitz only on rare occasions, or--dare we say it--play some man coverage? I'm saying it's not. What we saw last season was only a symptom of the disease known as Penn State Football 2010. Inexperience, timidity, uncertainty. That was the problem. Calling simple, ineffectively safe defenses was just a way the coaching staff attempted to sooth the pain. Well, it didn't work then, it surely won't work with a better team that can and should do more this season.

The secondary is usually the focal point for fans' anger toward the non-aggressive defenses. But this season, the secondary is likely to be the best unit on the entire team, as it returns every starter from last season, including players who started in place of injured incumbents. It's time to challenge these guys. D'Anton Lynn, Chaz Powell, Nick Sukay, Drew Astorino are all seniors. They know what they're doing. Let them jam the receivers. Let them blitz off the edge. Put them out there on an island and let them prove they can do the job. Lord knows, they have the talent. They have the experience. Let's see it in action. Hopefully that action comes in the form of devastating hits in the open field, interceptions, and beautifully smothering coverage.

3. Let the Blue Band Play. This one is a bit off-topic, but is every bit important to how the average fan experiences Penn State football on Saturday afternoons. Penn State has been saying for years now that the piped-in commercial music has not compromised in any way the Blue Band's ability or chances to play music in the stands. I'm calling bullshit on that. Since Penn State football became The Greatest Show of Great Shows of Not-Just-JoePa in College Football or something they keep renaming to something worse, piped-in public address music has become more prominent within the gameday experience at Beaver Stadium. They are no longer just snippets of music, or pre-game warmups music when the band isn't even done with Tailgreat. Nope, Penn State now plays full songs over the PA. You know, those raucous, adrenaline-pumping classics like... Sweet Caroline?

Penn State has a band for a reason. These young men and women don't spend hours a day in the broiling August sun to end up sitting on their hands in the stadium while the PA system does the work for them. The Blue Band works hard at what they do. I know, because I was one of them for four years. Is it tiring to play constantly? Absolutely. But that doesn't mean the band doesn't want to play. After a big play on the field, or during a timeout when momentum is on the side of the Nittany Lions, there is nothing--nothing--like hearing those staples of gameday in Beaver Stadium: Rock and Roll (The Hey Song), Victory, or the Blue Band's percussion entrance.

Tell me, honestly, would you rather have some piped-in 1980's Top-40 song blasting its artificial noise over the PA system? Or this...