If you were to ask Rob Bolden what he would be doing around 1:30 PM on October 23rd, sitting on the ground in the middle of Minnesota's brand new stadium wouldn't have been his answer. But yet there he was. Head in hands, ears ringing, and Dr. Wayne Sebastianelli talking to him as he has so many unlucky student athletes. It didn't make sense to Rob, certainly a few things didn't make sense to him as he fought through the hazy cloud that was his brain. But he walked to bench after throwing for 130 yards and a touchdown, missing just two passes--both drops--in just over a quarter's worth of work. He was finally finding his stride. This wasn't how it worked out in the movies, and it definitely wasn't how Rob had seen his day ending.

When Penn State's offense took the field a possession later, Matt McGloin, a fiery red-headed gunslinger from Scranton PA was calling out the plays from the huddle in Bolden's absence. McGloin threw two touchdowns and an interception that day, unintentionally sparking one of the hottest quarterback controversies of the past decade for Nittany Lion fans. Moxie against Poise and Attitude against Potential. The debate was born. 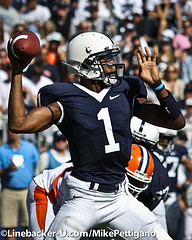 What makes Rob Bolden such an interesting story isn't what he did on the field in 2010 as much as it is what he could do in the future. The level of poise and maturity he has shown in the pocket is inspiring, but is also coupled with unfortunate, but expected mistakes. In a lot of ways Bolden is a referendum on Penn State's quarterback development program. He brings the tools, and the skills to be developed into a great player, but he'll need some help getting there. If Penn State isn't able to take him to the next level, it might say more about coaching than it does Bolden.

Simply put, Bolden put up good numbers against good teams. Against Iowa, Bolden managed to total more passing yards in one game than Darryl Clark did in his two games combined against the Hawkeyes. Facing a tough Alabama defense, Bolden held his own 144 yards in a performance that was probably better than the score, and his two interceptions might indicate. Playing Temple, Bolden lead the Nittany Lions on an impressive 96 yard touchdown drive that picked apart one of the nations best pass defenses.

While his 8 for 21 performance against Illinois shows up as a black mark on his record, there isn't any doubt that Rob Bolden has what it takes to grow into a talented player. In a lot of ways, Penn State was using a high school quarterback against some of the nations best defenses, and they were competitive.

But Does He Start?

Between a good offseason workout and spring camps Bolden should be in position to win back his starting job. He'll need to insure that he's moving forward with relationships on the team that could have become stressed over possible transfers, but there isn't any reason to think he can't beat out Matt McGloin for the second straight season. If anything, Bolden should be a better player in almost every aspect heading into camp. McGloin for the most part has hit his ceiling. Bolden is still growing.

If Rob Bolden is going to win his starting job back he needs to do two things. Gain a little weight, and become a more vocal leader. The rest of his development should be what comes with time on the college level and working with coaches. That being said, Bolden needs to develop the leadership habits that his teammates can respond to. That isn't to say that he was a bad leader while starting, but that his soft spoken personality may only work for so long. 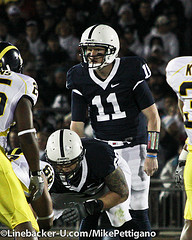 Matt McGloin might be the most confusing quarterback you'll ever watch. In all aspects of his game he is far from a great quarterback. He looks down his targets, he throws the ball into places that he shouldn't, and he tends to dwell on his last throw a little too much. All of that aside, he gets the job done, which makes it hard to bench him.

Clearly, if you've made it this far into the article you're fairly well versed in how last season played out for the Nittany Lions. McGloin took apart several bad defenses when he was called upon, and then wasn't quite up to the task when it came to OSU, MSU, and Florida. It's textbook"average" quarterback. Not good, not bad, but okay.

In McGloin's defense though, he made several great throws last season, doesn't get enough credit for beating Northwestern, and probably is disliked more for his off the field attitude more than anything else. He was the spark that the team needed when they were looking for a leader. He's got moxie and he isn't afraid to tell people. If McGloin should be remembered positively for anything last year, it was in fact, whether we like it or not, saving the season. While there is a lot to be said for the teams that McGloin played against, he still went out and put up pretty good numbers.

If one was going to measure Joe Paterno's power as of 2011, Matt McGloin would be that measuring stick. Paterno, who by all accounts is going 110% this year, is fighting for his final chances to get on to the Beaver Stadium field, calls some plays, and make a run at whatever he has in his sights. But even Paterno can't have it all. Last year, the coaches held a vote to decide the starting quarterback ( An interesting idea to say the least. Imagine Blackledge becoming starter via-vote) where Paterno was the only coach to vote for McGloin. If Paterno is truly running at full capacity he'll get what he wants. He might be spending too much of his coin on himself though.

But Does He Start?

It wouldn't be shocking to see McGloin start. If it wasn't for his performance against Florida I don't think the idea would make as many people upset. That being said, it seems as though McGloin is the underdog in the race. Bolden in all likelihood wouldn't have returned to Penn State if he thought he had no shot to win the job back, which I think he has a pretty good shot at doing. That being said, McGloin's starting job is somewhat out of his hands if he has an average camp. There are just too many things working against him.