Penn State has been and probably always will be recognized first and foremost as "Linebacker-U." The running back position, however, has produced its share of great athletes such as Lydell Mitchell, John Cappelletti, Curt Warner, Ki-Jana Carter, Curtis Enis, and Larry Johnson, to name several. While Evan Royster certainly earned the right to have his name listed with the aforementioned running backs, another player currently on the roster will likely be joining this elite list of backs within a couple of short years.

A year ago, Silas Redd was wallowing in relative obscurity, only known amongst recruitniks as someone with the potential to be Penn State's next great running back. In the meantime, the sole focus of the running back corps was on Evan Royster and how he was merely 400+ yards away from becoming Penn State's career leader in rushing yards. Royster would end up getting his record, but the person who may in fact take that record from him in a few years made himself known on the field last season. With the limited action he saw (though it gradually increased as the season wore on), Redd put the rest of the Big Ten on notice with his combination of speed, power, and shiftiness, traits that should undoubtedly lead to him being entrenched as this year's starter. 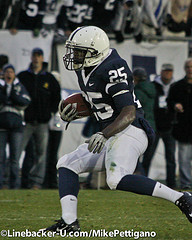 Redd was one of the crown jewels of the highly-touted 2010 recruiting class. After watching and learning behind Evan Royster last year, he is ready to be "the man" at running back and take the bulk of the carries. While Redd did in fact show flashes of brilliance throughout all of last season, his breakout moment arguably came against Northwestern, when his 131 yards and touchdown on only 11 carries helped spark PSU's dramatic rally from a 21-point deficit to earn JoePa's 400th win. If he can become better at keeping his balance and thus turn 5-10 yard gains into 20-25 yard gains, there is no question that he can produce a whole boatload of 2010 Northwestern-like performances throughout 2011.
Anything Else?
HELL YEAH, this awesome highlight reel! 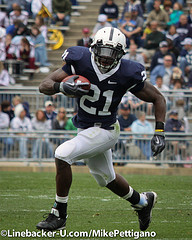 When we first heard Stephfon Green's name way back in 2007, it was about what a practice warrior he was. During his redshirt freshman year, Green ripped off a nearly 70-yard run in practice that produced AND1 Basketball Tour like excitement amongst his fellow teammates. While not the most powerful back, there's no doubt he's the quickest amongst the RB corps. Last season saw Green gradually give up more of the backup carries to Redd, which undoubtedly was due to Redd's power running game to complement his speed.

With Redd now the starter, and Brandon Beachum supposedly creeping up on him, it doesn't appear as if Green is about to see a significant increase in his carries. This does not mean however, that he won't be good for suddenly breaking off a 50+ yard touchdown run when you least expect it.

Ah yes, who can forget Green's garbage-time touchdown during 2008's curb-stomping of Michigan that caused sports bettors everywhere who picked Michigan to beat the 24-point spread to slam their drinks onto the table in disgust and get their knees whacked by their bookies.

Brandon Beachum missed all of 2010 rehabbing a torn ACL, but figures to be in the mix for some serious backup carries. Beachum still has two years of eligibility remaining including this year and has to be itching for a shot to prove what he's really made of. Curtis Dukes saw only two carries in 2010 despite positive practice reports praising his size and ability to plow over defenders. Whether Dukes will finally live up to the semi-hype remains to be seen. And don't expect to see walk-on Derek Day get carries in games where the outcome is still in doubt.

The potential is surely there for 2011 to be a great year for the running back position, provided injuries are kept to a minimum and Beachum and/or Dukes have breakout seasons.