Three Things Penn State Should NOT Do In 2011: Alabama, Quarterbacks, & Reverses

Share All sharing options for: Three Things Penn State Should NOT Do In 2011: Alabama, Quarterbacks, & Reverses

This is the second of a two part series.  Mike published the "Three Things Penn State Should Do in 2011" yesterday morning.

1. Be intimidated by Alabama Last year's trip to Tuscaloosa ended in a brutal 24-3 beating.  Greg McElroy, Alabama's starting quarterback who hadn't lost a game as a starter since middle school, threw for 229 yards and 2 touchdowns.  But that was hardly the worst of it.  As Drew Astorino correctly notes, The rush defense was completely embarrassed by the Tide's Trent Richardson, who piled up yardage by running over, around, and through the Penn State front four to the tune of 6.5 yards per carry.

That's right, with the entire defense stacked on the one-yard line, Richardson barreled through Chris Colasanti in the backfield and then knifed his way right up the middle for the score.  And that clip is tame.  Meanwhile, the offense turned the ball over repeatedly and our record setting senior tailback finished with 32 yards on 9 carries.  Simply put, last year's Alabama team outclassed last year's Nittany Lions in every way.

Last month, we noted that it all starts with attitude.  This Penn State team is vastly different.  The quarterback is a year older and, ideally, a year wiser.  The linebackers are healthy, athletic, and tough.  Last year's backup tailback (who averaged 5.2 yards per carry against Alabama as a true freshman) is the starter.  But perhaps most importantly, Joe Paterno and his staff are working the guys like they've never worked before in order to increase their toughness and conditioning.  Penn State must be ready on September 10th.  With a raucous home crowd of 107,000+ behind them, there's no reason for them to be intimidated.  Come out and hit like you mean it.

2. Have a hair trigger with the starting quarterback.  Robert Bolden or Matt McGloin?  For the purposes of this question, it doesn't matter.  Ben's more equipped to handle that question anyway, and did a fantastic job yesterday morning. 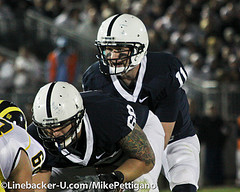 This Penn State team is in desperate need of leadership and stability. The offense needs to develop a rapport with their quarterback. The quarterback needs to be able to take control in the huddle without worrying about looking over his shoulder, nervous that any mistake will get him pulled in favor of the other guy.

This isn't to suggest that the staff has to stick with something that's clearly not working. That would be absolutely insane. But this team needs to have the roles defined. Joe Paterno requires his quarterback to show leadership above any physical ability. It's nearly impossible to lead a team forward when you're always looking behind you.

3. Run random drive killing end-arounds and reverses. We've all seen it before. Penn State starts with the ball at its own 20. They methodically drive downfield, picking up yardage in 5 to 7 yard chunks on the ground with a few mid-range completions. Suddenly, on 3rd and 3 from the opposition's 42 yard line, Penn State fakes to the tailback and hands the ball off to a receiver looping around in the backfield. The defense stays in its lane and drops the runner for a loss of a few yards. Penn State has to punt. I have to restrain myself from throwing my remote.

. . . and we all became enamored. Sure, a well-timed reverse or end-around with the right player can be a great weapon against a defense that's prone to over-pursuit. Last year's call against Alabama with Shawney Kersey is a prime example. Too often, however, the call comes so far out of left field that it fails and destroys the momentum of a drive. It's the most overused play in Penn State's entire offense.