Football is finally here! Rejoice! ...and don't look at the schedule for this weekend. While Big Ten football is back, it's mostly filled with the requisite cupcakes and creampuffs we all love hate. But hey, football is football, and even if the opponent has no business being on the same field as your team, it's still nice to see your record standing at 1-0 going into week 2. Now onto the previews! 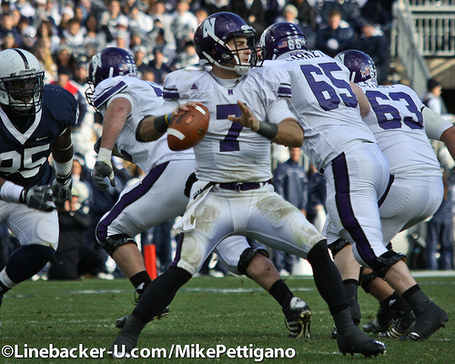 This is the de-facto game of the week because it should be the only game that finishes with a score that's within two touchdowns. There's a lot of hype surrounding Northwestern this year (especially from our favorite writers over at the Patriot News) and they'll certainly face the stiffest test (of any Big Ten team with hopes of winning) on Saturday. Even if Dan Persa can't go (his pimp walk may end up keeping him out of the game) I think Northwestern ends up winning this one.

Wisconsin kicks off the season for the Big Ten with a Thursday night home game against UNLV. Wisconsin is a team that's struggled at times with OoC opponents, but UNLV was 2-11 last year, and Wisconsin should make short work of them at home.

Michigan State is playing Penn State's favorite FCS team in a Friday night game. Needless to say, this game will be over by 8 pm.

Another game against an FCS team, another likely blowout.

Ohio State is actually playing a FBS team... but still not a very good one, the Zips were 1-11 last year. Even without the Tat5 OSU will win this one going away.

The Blue Raiders actually made a bowl game last year (a year in which they lost to Minnesota). They lost it, but that's more than Purdue can say. I actually think this should be a closer game, but I'm picking MTSU to beat Purdue this year.

Once upon a time, Arkansas State was a pretty decent team. They played in the Refrigerator Bowl twice in the 1950's, and made bowl games with relative frequency until the 1970's. Now, they're a middling Sun Belt team and week 1 fodder for Illinois.

Nebraska has won 25 straight home openers. This will be #26.

Minnesota will be a better team this year than they were last year thanks to Jerry Kill, unfortunately it won't be enough to topple USC on the road.

Indiana begins their season in a neutral site game against Ball State. When these two teams met in 2008, Ball State walked away with a 42-20 win. This year I don't think they'll be so lucky.

So these are my predictions for the week 1 slate of B1G games. Lets hear yours in the comments.