I'm a band dork. I've got Parade Order '05 cranking in my ear buds right now. You got a problem with that? Yeah, what I thought. Moving on...

I can remember in vivid detail my first pregame show. Never before had I been to a Penn State game. Never before had I marched in front of more than, oh, 500 people. But there I was, waiting underneath the south side of the stadium, with only the bright white light coming from the open end of the tunnel. What ensued was four of the best years of my life, due in no small part to the Penn State Marching Blue Band.

But I'll save that story for another time. Today, we're welcoming a special guest. Penn State drum major Ian Kenney will be flipping his way through another season at the front of the Blue Band. He's been kind enough to answer a few questions as the season opener approaches in two days. 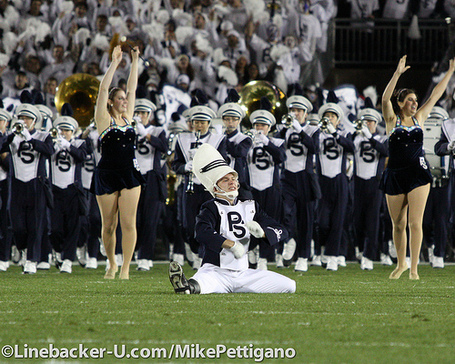 Join us below the fold...

BSD: Most fans don't realize that the drum major, even a multi-year incumbent, must try out for the position each season. What went into preparing yourself for this year's tryout? Compare that to your first tryout to be the drum major.

Ian: This year was much more relaxed in terms of an audition.  I was the only person to apply, which is typical after a year in which the Drum Major performed all their duties well.  In 2010 I auditioned against six others, and it was extremely competitive.  For preparation, I do a significant amount of physical conditioning - six days a week, primarily cardio, core, and stretching, with some emphasis on general lifting to keep the rest of my body strong.  I limit myself to 1-3 flips per week due to the high level of stress the impact of the ground places on my lower legs.

BSD: What's this year's "rookie" class look like; how many did the band take?

Ian: This year's rookie class was much smaller than we have seen in the past few years, but so far they have exceeded expectations and they are performing at a high level early on.  They're doing a great job of picking up the marching fundamentals.

BSD: At Penn State, the term "Band camp" is hardly the punch line it has become in pop culture. Run through for us a typical day of pre-season camp for the Blue Band.

Ian:  Pre-season camp is brutal, especially for the rookies, since they march a full extra "three-a-day" more than the returnees (so they can be taught, and cuts can be made).  Our days start at 8:30am, and excluding lunch and dinner breaks, they end at 10pm.  It totals about 27 hours of marching in three days for the full band - with a considerable amount of that time doing the physically-demanding high step.  In those days of camp, we managed to learn (at a basic level) our pregame and halftime shows.

BSD: Have there been any changes to the Pregame show this year? Would you say Pregame is the toughest show the Blue Band performs, especially considering the physical nature of the routine and the powerful adrenaline rush during the pregame atmosphere?

Ian:  Pregame will be the same as it always has been, although the goal is always to push the tempo, which we have been doing a much better job of so far this season.  The only new addition will occur when Nebraska comes to Beaver Stadium and we will form their "N" (different from the Northwestern "N") and play "Hail Varsity" (their fight song).  I could make this a stretch and say that there will be some additions to the Drum Major uniform this season, which you will see on the field this Saturday.

BSD: What's the halftime show for Indiana State? Who designed the show this week?

Ian: I typically don't like to spoil shows before they happen (adds to the anticipation) - but this week's show theme (not the music) was based off of the title of a film that came out over the summer, and the drill was written by director Dr. Richard Bundy.

We'll have much more about the Blue Band this season. Ian will be back, as will a few other features. Remember to cheer hard for these young men and women this Saturday. They've put in a lot of work and deserve to have everyone there early with them to be a part of the Penn State football pregame experience.

Update: And just for fun, from my senior year: