Penn State In Dire Straits Without An Identity

Share All sharing options for: Penn State In Dire Straits Without An Identity 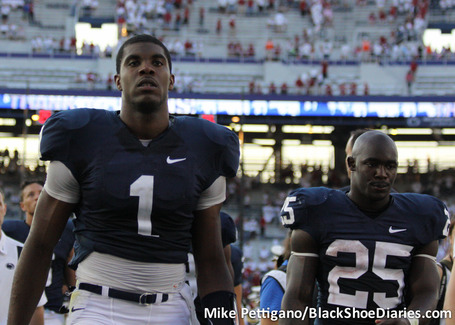 In and of itself, losing to Alabama is not the greatest loss in the history of Penn State football. Most Penn State fans were quick to say that even though they were hoping for a Nittany Lion victory, it wasn't as though a loss was unexpected. For a myriad of reasons Penn State fans have come to expect this sort of a result against top opponents. However this Saturday was a particularly special display of the widening gap of talent and coaching between top programs and Penn State.

Certainly this could be seen as a reactionary article. There were good things to be taken away from this weekend's matchup with Alabama. The defensive line played well, and pass protection was considerably improved. Moral victories shouldn't be accepted at Penn State, but it isn't as though the day was a total and complete loss.

That being said, it is a rare day that Penn State looks so glaringly over-matched. The final score, though numerically close, was not at all indicative of the dominant performance Alabama displayed for the final 40 minutes of the game. Penn State looked confused on the sidelines and lacked direction with it's play calling.

Asked if the offense had an identity, Derek Moye responded without hesitation. "No, I don't think we do."

For Penn State, the two-quarterback system should come to a close after Matt McGloin went 1-10 including two consecutive 3-and-outs in critical junctures of the game. Rob Bolden didn't have an outstanding game against the Tide, but clearly looked more capable in the pocket. Even with the revolving door at the quarterback position, the offense wouldn't find out who was at the helm until getting ready to head on to the field.

"I have no idea how they decided" Silas Redd said. "We (the offense) found out before the possession started"

In the end, it's the lack of direction on offense, and a true quarterback to lead the team that is holding a talented roster back from succeeding. With plenty of football left to play and two more games before entering Big Ten play, it's far from Panic Button time for Penn State fans. That being said, the writing is on the wall for a season that could go two very different directions.

And for Joe Paterno, who said he'd be calling more plays this offseason.

"It's pretty much our game to call, if Joe has something to say he'll pass us a note or send one to the sidelines" Galen Hall said.