Enough OR Enough: The QB Battle is Over... For Everyone But Joe Paterno

Share All sharing options for: Enough OR Enough: The QB Battle is Over... For Everyone But Joe Paterno 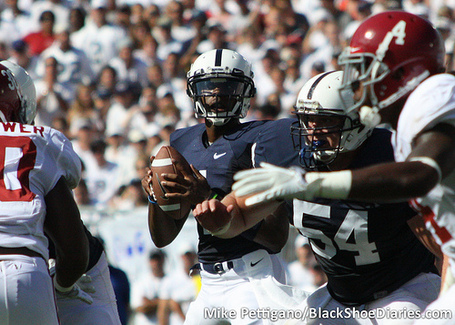 The official Penn State depth chart is out, while Joe Paterno confirmed in today's press conference the Nittany Lions will be forced to suffer though yet another week of indecision on offense...

Before anyone jumps on this saying "official depth charts are meaningless," let me say that while I don't agree wholeheartedly with that proclamation, I do believe that official depth charts are generally not 100 percent accurate. But they are accurate 99 percent of the time. Penn State probably won't actually debate which quarterback to start this Saturday against Temple. We know that because it hasn't been the case in the two game so far when Rob Bolden and Matt McGloin have been listed as one OR the other. Oh yeah, and Paterno said it was going to happen just a little while ago.

What it does mean is Penn State will continue the charade, despite McGloin doing everything in his power to slam it shut last Saturday against Alabama.

"I thought the two quarterbacks played a pretty good game,'' Paterno said after Penn State lost to Alabama on Saturday. "Let's be realistic, there were a couple of big-time throws out there that we didn't come up with the ball.''

C'mon, Joe. Who's being realistic?

Why is Penn State's head coach still painfully stuck on Matt McGloin? You know how many big-time throws Mac threw against Alabama, throws that shoulda-woulda-coulda been caught for a big Penn State gain?

One, to Justin Brown over the middle on third down.

You know how many of Mac's throws shoulda-woulda-coulda been picked off by Alabama? It depends, are we just counting his first two series? Okay, just the first two series.

Two. Out of three passes.

So, to recap, McGloin had more near-interceptions in his first three passes than near-big-time catches the rest of the game. Do I even need to mention for the thousandth time McGloin's stat line from the game? But Joe's right, the two quarterbacks played a pretty good game.

Some, mostly in the comments and outside message boards, have claimed Paterno is holding a grudge against Bolden for wanting to leave the program over the winter, in turn causing Paterno to favor McGloin in this competition. I honestly find that a bit tough to believe, but the doubt is there in my mind. If you look back at the quarterback battles, Paterno typically has his guy, and the staff has the other. Sometimes it works out, sometimes it doesn't. But since no one knows--not publicly, at least--what the real story is, if there is one at all, let's just leave this part of the argument alone.

Bolden didn't exactly light up the Alabama defense on Saturday. But he did lead Penn State on its only two scoring drives of the game, which everyone knows is the only thing that matters when deciphering this quarterback debate, right? (that was sarcasm, folks) It wasn't just Bolden's scoring drives that are evidence this drawn-out controversy is, or at least should be, over. Let's look at the third down results by both quarterbacks against Alabama, including both runs and throws:

Something that was overlooked after the game was Penn State's 8-for-17 conversion rate on third down. You know how many 3rd down plays Alabama converted into 1st down? Eight, in 17 tries. That's right, both teams converted the exact same number of 3rd downs in the same exact number of attempts.

And which Penn State quarterback was the only one to convert a 3rd down? Bolden, who converted half of Penn State's 3rd down attempts, three passing and one rushing. 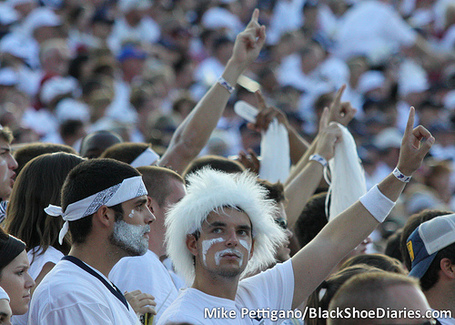 The student section sure knew which QB was more effective against Bama.


This was a defense with a pulse... probably the best pulse in college football. Both quarterbacks had chances to make the Penn State offense work, to do something that would result in points for the home team. Bolden got results. McGloin didn't. And just as we knew last week following the Indiana State game, that opener meant nothing. Alabama would be the real test for these quarterbacks. Paterno himself has always praised players who get tough in the face of adversity, who can work through the problems, rather than melt away.

That is, Paterno did that until this week.

Bolden, like most BCS program quarterbacks to face Alabama this season, had trouble against the Crimson Tide defense. McGloin didn't have trouble against Bama. He was non-existent. And that's the difference between these two quarterbacks right now, especially against half-decent defensive football teams.

There is a ceiling above McGloin that he just isn't capable of breaking through. His red hair is brushing up against it, as he tries his mightiest to crack the pane. But he hasn't, and probably never will. It's not his fault, either. If he were describing himself, I think he would use the saying "I'm a good backup to have."

And that's just it. McGloin is a good backup. If the starter gets hurt, or has to come out, McGloin is capable of holding down the fort for a little while. But he can't win the games against good teams.

On the other side of this, Bolden is still on the ground floor. His ceiling is two stories up. Whether he has the drive or ability to even get up there remains to be seen. What we do know about Bolden is that he has the tools and skills to keep improving, maybe even become a great quarterback someday. But Joe Paterno isn't allowing him to get off the ground floor, never mind up the first flight of stairs. Meanwhile, it seems as if Paterno has ushered McGloin into the elevator.

McGloin has proven all that he can do on the field. We know what we're getting with him.

Bolden hasn't been given that same opportunity.

And it won't change for yet another Saturday afternoon of Penn State football.