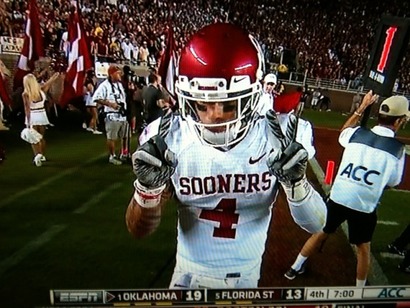 There weren't a ton of tight, dramatic games this weekend, but what we may have lacked in quantity was made up for in quality. The Oklahoma - Florida State game lived up to the hype (in my opinion, anyway), and both teams showed that they are among the better squads in the country.

Hopefully some of you were able to take your mind off of a frustrating Penn State performance by taking in the later games. If you weren't, here's the highlights of what you missed.

America, get to know Kenny Stills. The Oklahoma receiver was the star of the show on Saturday night, pulling in seven catches for 125 yards and the go ahead score with 7 minutes left in the 4th quarter. Neither team dominated the other, but Oklahoma did what it had to do to escape a very hostile Doak Campbell Stadium with a win.

Both offenses were downright bad for long stretches of this game, but the defenses looked great. LSU's defense, in particular, looked like a bunch of absolute maniacs.

I told you last week that Navy was the kind of team that would drive Steve Spurrier crazy, and of course I was right. The Mids outworked South Carolina for all 60 minutes, but came up just short at the end. Navy may not have the most talented roster in the country, but they are capable of beating just about anyone. They'll go for their 4th straight win over Notre Dame later this year, and they very well may get it.

A lot of people have been wondering what kind of team the Florida Gators would be this year, considering all the changes schematically and in the coaching staff. I think this game went a ways to answering that question. The Gators won't be as high powered as they were under Urban Meyer, but they look to be fully recovered from a terrible bout of Addaziosis. As for Tennessee, they're getting there, but losing star wideout Justin Hunter to a torn ACL is a massive blow.

I suppose this counts as revenge for Texas after UCLA came into Austin and whupped them last year. Pistol Rick Neuheisel is pretty much polishing brass on the Titanic at this point.

Tech had 768 yards of total offense against a BCS team. 604 of those yards were on the ground. I know Kansas is hardly a power, but those numbers are absolutely silly. The Ramblin' Wreck may be a player in the ACC this year.

Any time Vanderbilt can hang 30 unanswered points on you before scoring a meaningless garbage time touchdown, a coaching change may be necessary. The winner of this year's Ole Miss - Georgia game will be decided by which coach's pants don't burst into flame first.