Share All sharing options for: L247: Rob Bolden to Start vs Indiana State 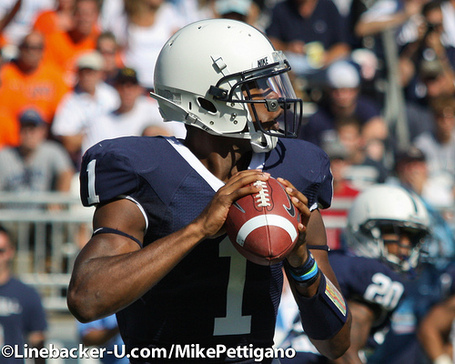 Sean Fitz continues to impress at Lions247.com, this time scooping the world by reporting true sophomore quarterback Rob Bolden will start for the Nittany Lions against Indiana State tomorrow:

Multiple team sources have informed Lions247.com that a decision came down on Thursday, and it was communicated to both participants in the competition that sophomore quarterback Rob Bolden will get the start against the Sycamores over junior Matt McGloin.

As I will do right now, Fitz cautioned that both quarterbacks will play on Saturday. It's been widely circulated that there will be some weird system of rotating Bolden and McGloin each quarter. Not entirely sure how that will work, since offensive drives don't end just because the quarters turn over. But it might not matter before, or even after the game.

This season open doesn't allow either of these quarterbacks the chance to prove much of anything. There's only so well one can play against an FCS opponent. On the other hand, if one of these guys fails to show up mentally, looking definitively worse than the other against such a weak opponent, it could be the only way Penn State finds a starter for Alabama next week.

If there is one thing all fans must do heading into tomorrow's season opener in Beaver Stadium, it's keep an open mind. Don't go in thinking one quarterback will do much better than the other, regardless of the starter. Bolden and McGloin had their moments in 2010. Both played very well at times; both sucked, too. But this is a new season, with a new team, against different opponents.

Bolden threw for 1,360 yards, five touchdowns and seven interceptions last year, completing 112 of 193 attempts. He started the first seven games, but went down against Minnesota with a concussion. Bolden did make a brief return to start against Northwestern, but was done for the year soon after.

Matt McGloin threw for 1,548 yards, 14 touchdowns and nine interceptions in 2010, completing 118 of 215 attempts. Mac entered the Minnesota game in relief of the injured Bolden. McGloin started five of the final seven games, but regressed terribly in the bowl game, throwing more than half his interceptions (5) in that one outing.

Penn State couldn't have asked for a better way to start the season, with a soft opponent to allow this thing to get worked out. Then again, maybe even a MAC or C-USA level of opponent would have been more helpful. Indiana State might have its moment or two tomorrow, just as Youngstown State did last year. But for what Penn State wants to do this week--let's not kid ourselves, it's all about preparation for Alabama--ISU might not help show what needs to be seen from this Nittany Lions team.

Either way, Penn State now has a starting quarterback for 2011... even if it does last only one week.