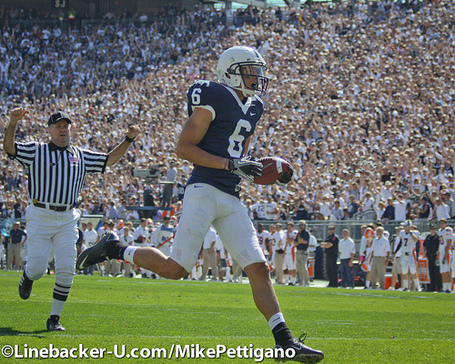 Penn State announced a few minutes ago that safety Drew Astorino, defensive tackle Devon Still, receiver Derek Moye and offensive tackle Quinn Barham have been elected team captains for 2011. The team voted on Monday, but the announcement was kept under wraps until tonight.

There was a whole bunch of theories what would happen with this, mainly centering around revolving captains each week. But now we know.

I'm a bit surprised that Chima Okoli didn't get the nod, but Quinn is definitely a solid choice. He's the left tackle on a team that could really go far this year, and the offensive line will have to lead the way.

Moye is kind of the "well, duh" choice. Still is the No. 2 "duh" choice. Astorino is interesting, considering there were rumors of Nick Sukay getting a captain spot after being one of the representatives at the press conference. But Astorino has been playing since he was a freshman in 2008, and a very good player, when he can stay healthy.